My Peninsula of Plenty campaign kicked off the other night. Things are still being worked out with the players, but I would like to give a brief game report in my next post. This post, I would like to focus on background.

First, The Peninsula of Plenty is based on Roman history and mythology. My game map is still in pro-type mode and has a scale of six miles per hex. It is roughly the same size as Italy. 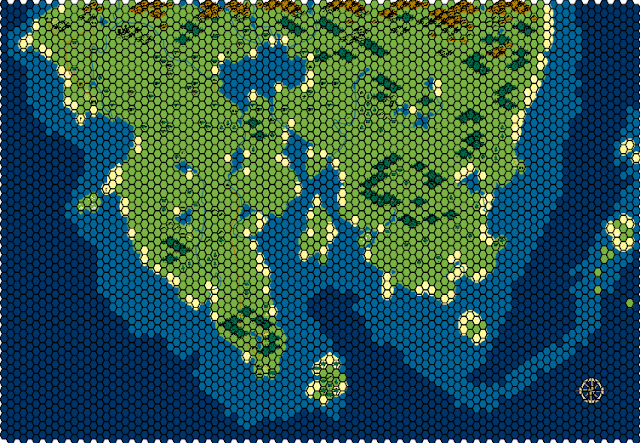 The capital is located on the west coast of the Peninsula. It extends eastward for approximately 2/3 of the landmass and southwards a good ways. The Empire started off as a small town, expanded to a Republic and then to an Empire just like them Roman. This culture has existed in some form or another for 1,200 years. It has fallen into stagnation.

What is different about this culture? Well, there are elves, dwarves, gnomes, halflings plus a whole cast of monsters. In this setting, the dwarves occupy a couple of hundred miles around an ancient volcano on the eastern lobe of the Peninsula. They represent the various hill tribes that engaged the Romans. Halflings are invaders/refugees from over the northern mountains, gnomes are friendly towards all and the half-elves are trusted by none. On the far east coast is the Capital of the Elves and their clients the half-orcs. The elves arrived from over the sea, and represent Hannibal and the Carthaginians. For a long time, it looked as if Roman would never be free of Hannibal. Just imagine if Hannibal had magic.

Half-elves are the most prevalent race on the Peninsula, They are viewed as monsters or misbegotten children by humans and deformed but still loved creatures by the elves. The elven Kingdom believes that they have magically devolved from true elves, while the humans believe they they are the offspring of evil, horrible elves and the innocent human victims they prey upon. While neither humans or elves will treat with them as a political power, they are free to move throughout the Peninsula. Other races like them just fine.

The human Empire clashed with the elves and dwarves over slavery. The Elves forced the Empire to give up non-human slaves. This was devastating to the human economy. In just one generation, the Emperor realized he couldn't defeat the elves and in an effort to save face, presented the idea that the legendary culture which the empire was founded upon never really endorsed slavery. He was a manumissions, as opposed to an out and out abolitionist. In this way, he prevented the general public from lashing out at non-humans in a way that would create an unwinnable war. For the Emperor, it was not merely lip service, but for general public, the reception of freedom for all was not established. Debates and outright war over slavery has racked the human Empire for centuries, keeping them from dominating the Peninsula.

The human Empire, (which I have not named yet) needs to secure it's southern flank from sea raiders. They would very much like to believe that it is the elves, but it isn't the elves. To this end, they will be deploying the 55th Legion to the area. The Fighting Five-Five, will take the role of sailors, based out of the city of Tabletop*.

Since the loyalist town of Tabletop is outside of the controlled border of the Empire, the Emperor's Council has employed the PC to blaze a trail of exploration to the town. The characters are also charged with checking on the Compass Rose Inn, a former Keep on the southern border. This was done in the spirit of the module X-1 Isle of Dread.

In the very next post, I will detail the PC's adventures so far.

*Why did I name a major city Tabletop? As a child I used to fish and swim off of some submerged, tabletop like slabs of concrete on the shores of Lake Ontario. It became a part of most of my campaigns and neither I, nor my players every made the connection between "Tabletop Games" and "The Town of Tabletop" since all of us have been to this real life location which appears in most of my campaigns.
Posted by Phil Viverito at 8/26/2019 12:10:00 AM