Lately, updates have fallen by the wayside. This has happened for a couple of reasons. I have taken on some new responsibilities at work, I've begun working overnights in a group home in addition to filling in for a teacher out for training this week.

My son has been working a camp in Wyoming county and managed to lose a whole backpack of critical supplies for his work week. Between stints at work, I've been ferrying camping supplies to him at random because he doesn't know what he lost until he needs it.

I am bone tired.

Let me give you the updates for the past couple of weeks.

In the middle of July, I put the 52 Weeks of Magic of series on hiatus. That will be back at the end of August. I have also decommissioned three other blogs and imported their data to These Old Games. I am still in the process of vetting data from that process, some posts will be completely deleted while others will be adapted for here.

To this end, should now see some new tabs above: Short Stories and Hardware. "Short Stories" is exactly as labeled, some fictional and some from real life. "Hardware" is comprised of a series of links to computer support issues that I have run across while maintaining old hardware, usually for this site.

On July 15th, I launched The Compass Rose Minisetting title on DriveThruRPG. On July 28th, I launched a similar title called Kobold's Folly. Based on the feedback I have received, I separated the maps from the books, causing me to relaunch Compass Rose to match the style of Kobold's Folly. These are ruleset agnostic titles and are merely maps and descriptions for quick plug and play into your campaign. Sort of like a travel guide for DMs.

Zero to Hero and the Character Sheet continue to do well on Drive Thru. Thank you for downloading them. 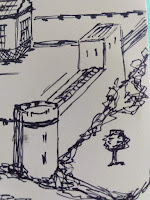 Compass Rose follows the lives of the von Landskeep family and I have always intended to expand this title and align it to D&D and AD&D. Look for that in late August. I intended Kobold's Folly to be a one shot with no expansion, but King Minwan and his sister Hermin are so interesting, it may receive the same treatment as Compass Rose. When? Not sure. Maybe September.

The final update was to the Tek Tab, with new data for July being added.

Upcoming changes to website are based off of my experience from this round of updates. Right now, the Gemstone IV tab, Maps tab and Pregenerated characters are all static pages. It is more logical to break them down by subject and recreate them as individual post. The tab feature can pull up a chronological list of posts by subject. This makes far more sense, as my web stats do not include static pages.

One last item is, it has recently come to my attention that I will be going to Disney in November.

Thank you for being so patience with all of these updates and changes as I get everything in order to present more content to all of you. I couldn't and wouldn't do it without you.
Posted by Phil Viverito at 8/03/2019 09:54:00 AM

Email ThisBlogThis!Share to TwitterShare to FacebookShare to Pinterest
Labels: Updates