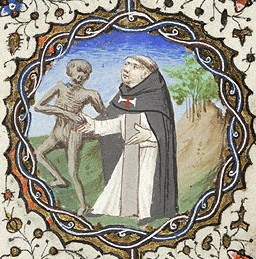 The Cowl of Death is a magical monk's habit with hood. The cowl is imbued with the spell Feign Death like last week's Cloak of Peaceful Repose. It will immediately affect the wearer under one of two conditions:

1) the wearer is rendered unconscious by any means other than normal or magical sleep,
2) the user pulls up the hood and invokes the words, "memento mori".

If either of these two conditions are met, the wearer will collapse to the ground, seemingly dead as per the spell description.

The cowl has two other features. Over a period of an hour, the wearer will seem to rot while actually regaining one hit point (if any had been lost). Normally, the spell would prevent the recovery of hit points, but this item is designed to protect the wearer. The illusion of rot will prevent all but the most hungry scavengers from attacking the wearer. Intelligent creatures are allowed a saving throw vs. magic to ignore the illusion and the resulting implication that something was horribly wrong with the person before being struck down.

The Cowl of Death normally has 20 charges, but charges are only used when the command word is used. Invocation of the command can be verbal or mental. Being knocked unconscious does not use a charge.