The Tarnian Empire derives it name from a dozens of mountain lakes called tarns. In the north western region of the Empire is one of it's oldest settlements called 'potamus Tarn (now Bay). 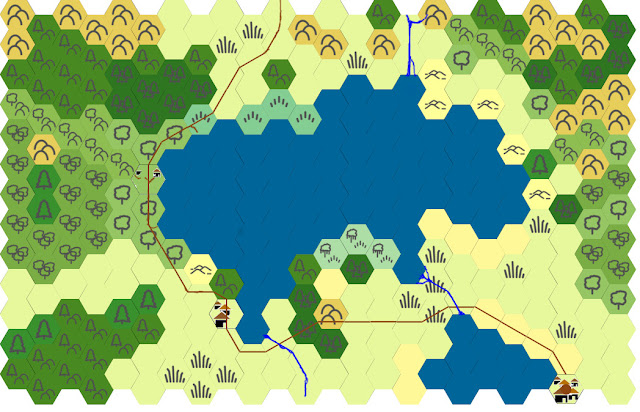 The area's main feature is not a tarn (or bay) at all, but a massive lake. The lake is fed by many tarns to the north and give it its name. The lake supports many types of large animals, the hippopotamus being the most noticeable. Gazelle, wildebeest and lions are found on the north and south sides of the lake, the treed areas host puma, rhinoceroses and deer.

The local inhabitants have built three small walled towns. The plains are home to many fortified houses. These fortifications have solid stone first and second floors but often have ramshackle third, fourth and fifth stories. Their purpose is to protect against the larger animals in the area, especially the unpredictable hippos and rhinos.

In the Century of Chaos, many of these fortified houses were burned to the ground by Elven and Orcish warbands. A few were reconstructed as actual keeps, but most were rebuilt with sturdier but still wooden upper stories.

This map was created using an online editor called Hextml and some details were retouched in GIMP. I'm looking to redo them with Worldographer.
If you are interested, I have a small book called Zero to Hero: Uncommon Commoners which includes farmers and huntsmen as classes for your old school D&D campaign. Priced at pay what you want, every download no matter the price, supports me as an author.