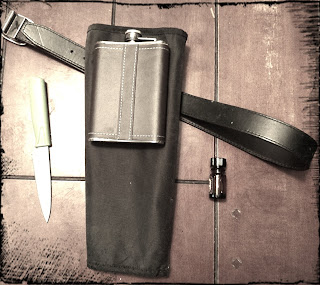 The first magical item created by the sacerdos of Tabletop was "The Rations Bag". The sailors call them "Rat Bags", a name that all clerics hate universally. (See World Building Vignette #1.)

The Rat Bag is an oilcloth belt pouch with a tie down at the knee, much like a holster. In fact, the exterior of the bag has a large flat sheath for a knife or small dagger.  Typical closed dimensions are 12" x 2" x 5", however many different sizes are available based on the size of the recipient. The bag tri-folds, and when opened completely is 12" x 15" x 2". It has three small pockets, two are the size of a deck of cards and the third is approximately the size of a thumb. One pocket is empty for personal goods, the second contains a piece of hardtack and the third holds a spool of fishing line and three hooks. Two loops hold a flask of water and a vial of oil, wine or brandy. The flask is 8 oz. and the vial holds about 1/2 of an ounce.

The magical properties of the Ration Bag are not evident on inspection. Three times a day, the bag will produce one piece of hardtack wrapped in an edible paper-like seaweed, refill the flask with water and the vial with water, wine, brandy or oil. The vial will produce one of these fluids at the request of the holder, at the time of pouring. No item placed within the bag will rot or rust, including the knife or dagger.

Hooks, knives, daggers, and line are not replaced by the magic of this device. They are merely preserved against rust and rot. Sailors have obviously noticed that the device may be used to supplement the ship's stores and it is common to decant liquids into a common pool for emergencies. The hardtack is not often pooled in this fashion as it is not packaged against spoilage or rot.

These bags are produced in pairs for each sailor under the tribune's command and the sailors are required to have them when shipboard. One bag will always have a knife and the other a small dagger. Stealing the bag or it's contents from a sailor is a capital offence as they are so important for the safety of the ship's crew.

Items within the bag are not magical in nature. For example the flask can be replaced with another, as can the vial. However, there must be a flask or vial present to refill. Each ship has it's own design for vials, daggers, knives and flasks but sometimes the sailors swap them for personalized items. They do keep the original items. As a consequence, many sailors have a small, flat box which holds the replaced items as a memento of past ship assignments.

These items are treated as service badges to particular voyages and are passed to next of kin. While not technically illegal, it is taboo to sell these items. In times of hardship the tribune or various religious institutions will pay sailors for the privilege public of display of these trophies. Payment is in wine and grain, in one year allotments. At the end of the year, the items are returned to the sailor or his next of kin. This is an important governmental control on the economy. Generally, next of kin do not receive this privilege, however, exceptions have been made usually based on the outcome of a particular voyage or on the basis of food scarcity in town.

3.5 Craft Item Requirements:
Price: 1,000 gp (per pair)
Caster Level: 7th
Aura: Conjuration
Activation: Open bag, except the vial which requires a verbal command of Oil, Brandy or Wine in any language.
Weight: 2 lbs each
Spells: Create Food and Water, Mending or Make Whole, Dimension Door.
By tradition, the interior of the pockets are lined with either frog skin or fish scales, however inclusion is not mandatory.

If you are interested, I have a small book called Zero to Hero: Uncommon Commoners which includes sailors as a class. Priced at pay what you want, every download no matter the price, supports me as an author.