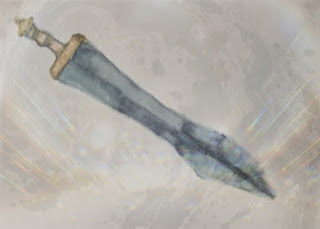 Emulous is a cursed gladius (short sword) with dangerous powers. This +2 gladius is neutral evil, speaks, has telepathy along with several other magical powers. As implied by it's name, it invokes jealousy through control of the wielder.

Its primary abilities are fairly useful, detecting magic and good or evil at 1" at will.

Emulous has two extraordinary powers, clairaudience and clarvoyance. Since the sword is intelligent and uses telepathy, these two powers are far more dangerous to the wielder than useful. Emulous is able to present these powers, meaning that the sword can force them unbidden on the victim and opportunistically "reveal" information to that person about allies in an effort to drive the wielder to subvert them. The holder of the sword will notice that the effects of these two powers are about a round each, but the sword is able to speak over the images and sounds to work it's evil intentions. It is the king of context shifting.

If the wielder invokes these powers willingly, it is far less likely that Emulous will be able to spin the effects to it's own advantage.

Emulous has an Ego of 11 and intelligence of 17.

Under great duress, Emulous will detect food and water for the wielder and his allies. Only the sword can decide to use this power and food and water are the only objects it can detect. It provides a direction but not a distance. The price of this power is the loss of all other powers including speech and telepathy while retaining the +2 to strike and damage for 24 hours. During this time, Emulous is deaf and dumb to what is happening around it. Its intelligence drops to 3 and ego drops to 2, meaning most healthy people can set the sword aside. Obviously, it is more likely to take this gamble when the wielder is weakened by hunger and thirst.

The sword usually communicates using the common language or telepathy in that language. It rarely uses it's ability to speak neutral evil. It does not like having detection spells cast at it and will hold a caster in disdain if it notices. On the first encounter with the party, the sword will strike up a conversation and offer knowledge of all of it's powers except detect food and water. It will deflect questions of alignment, but will not lie to do so.

While Emulous is evil, it is intelligently so. It will not willingly strike at other player characters during combat with hostile forces. It desires the wielder to take the lead position in the party and will assist in this endeavor. It never requests that the wielder divest him or herself of other magics and will compel the the holder to have defensive magic and good equipment. It is cagey around animals, especially magical animal companions (familiars warhorses, etc.), choosing not to speak aloud in front of them if it can be helped. It views animals as rival intelligences, no matter how low their actual intelligence or paltry their skills are.

Emulous does not view killing animal companions as a particularly good idea as it invokes fear in humanoids and causes them to raise their defenses. Additionally, it does not like to kill children or women unless they are a viable physical threat. It will refuse to strike if it feels justified and will attempt to move to another, more civilized person as soon as possible. Again, while evil, it is not chaotic. It may engineer a heroic and forlorn fight to do in such a vile creature. Of course, it will do so in front of witnesses so that it's fame increases and someone more pliable will take up the sword.

To a degree, it will evaluate equipment and magic items found and try to direct them to the person in the party it feels is the best match, including hirelings and retainers not normally allowed a choice of equipment. It will use oration over out and out demands to do this as only the wielder can be compelled. The sword seeks to dominate the whole party, not just the holder. It desires to be come a legendary sword in the hands of a legendary hero, at nearly any cost.

If granted a quiet moment, it will attempt to eliminate all those who are critical of it's owner or itself, either by revealing information that diminishes them in the eyes of others or more rarely, by murder. It will only engage in murderous ploys once the owner is subverted to its will for a couple of weeks, perhaps months.