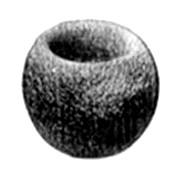 The Mortar of Pestilence is a massive variation of the Wondrous Decanter. They stand 6 feet wide and 4 feet tall. The Mortar must be mounted on some sort of pivot. They are often found on castle walls as a defense. They can disgorge 100 gallons of water, like 3 bathtubs full, in one second. This will cause 1d6 points of damage on impact and will push the victim back 1d12 feet for an addition 1d6 points of damage. If the surface struck is a slope, the victim will slide further and possibly take more damage. The target area is about 10 feet by 10 feet.

But what about the Pestilence? One of the first attempts to use the Mortar involved oil. A couple of pours of oil worked correctly, but it was found that water was far cheaper. One of the Mortars was not poured and over time, the oil went rancid. The oil was impossible to light and within minutes everyone with in 120 feet was sickened, including the defenders.

Oil will go bad within an hour when put in the Mortar. The sickness is airborne and will require a saving throw vs. Disease in the first round of pouring for everyone within 10 feet of the Mortar or within the target area at the base of the wall. A failed saving will sicken characters to the point that they will suffer -2 penalty on all ability scores and a -2 to attack. Anyone who enters the target area will need to make a save, even hours later. This effect will be washed away by the next rain or by pouring water on it.

The mortar can be filled by bucket or by Create Water spells. Usually clerics will have to work in shifts to fill the whole vessel by magic. Buckets are easier than magic and nasty materials can be added to the vessel. Oil is most common, but so is sewage. Any organic material placed within the Mortar will rot and spoil within an hour and causes the disease effect. Aside from water, any substance placed in the Mortar will become so foul it will be unrecognizable and often does not operate as it should. For example, poison will not be a poison on decanting, oil and alcohols will not burn and milk... oh god. Milk!

Pouring acid into the Mortar of Pestilence will demagik the device and it will bubble and spatter out of the container over a period of 100 hours. Everything in the area must make a save as if they were splashed by the acid.
Posted by Phil Viverito at 10/28/2019 10:44:00 AM