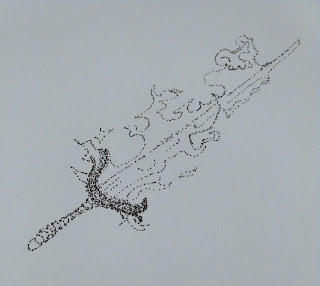 Since my campaign seems to have died, it's time to get back to 52 Weeks of Magic. This week 40 and The Retort is item 28. Twelve more to catch up.

The Retort is a magical weapon, which initially appears as a leather wrapped handled, with no blade or guard.

The weapon counts as a +5 weapon, but has no bonuses to strike or damage. When the holder is threatened, The Retort will magically appear in the owners hand and ignite into a magical blade 4 feet long. If the user does not have a free hand, the weapon will appear between them and their opponent, waiting to be grasped. The weapon is usable by all classes.

The blade is a cracking field of energy which follows the form of a blade but writhes and twists towards the opponent or opponents. This amorphous form reduces the wielder's AC by 4, making them harder to hit because the energy causes fear. The blade is obviously dangerous. It's light will illuminate a 30 foot area to full daylight.

On a successful to hit roll, a living target must make a save vs. death. If successful, they take no damage. If failed, the target's hit points are reduced to one hit point and they are rendered unconscious for 1d6 turns. No matter how many times struck, the weapon will always leave one hit point. The Retort is not exactly cursed, but holding it will cause the wielder to deal with all threats with The Retort and not switch to another weapon. This obviously prevents the user from issuing a final blow to kill a target.

If the target cannot be rendered unconscious (such as undead or a golem), they will be encased in a field of energy matching The Retort's blade and take 1d4 points damage for the next 3 rounds. Each hit will increase the duration of the field of energy by one round. While this field has some of the aspects of a flame, it is magical damage, not fire.

The Retort allows the user to see invisible or astral creatures and will leap to the user's hand when confronted with such threats. Against otherworldly creatures such as demons or creatures summoned, the weapon will leap to the users hand and radiate a circle of protection for 10 feet. The wielder can lash out at these creatures with the blade so long as they are within 6 feet of the circle of protection. It is a one-way barrier to physical attacks, not magic or missiles.

If the wielder strikes themselves on purpose, they will be surrounded by a corona of flame which will will heal them to full hit points immediately. The owner must be under some sort of threat, such as eminent combat to use this power. People who have healed themselves in this fashion will feel numb and cold and the wound will burn with flames like The Retort's blade.

Once the immediate threat is ended, The Retort will try to extinguish itself. If the user wishes, they can force the blade to stay lit. The user will lose half their current hit points and will be unable to sleep, meditate, pray or study spells. The blade will remain lit for 24 hours, during which time, the holder cannot be healed by any means, except a wish. Wishing for healing will also extinguish the blade for a week, rendering it useless for that time.

If the wielder dies or is reduced to 0 hit points while the blade is lit, they cannot be revived, reincarnated or resurrected until they are physically separated from The Retort. If the weapon is taken up by another person, it will refuse to operate for the previous user. If the weapon is thrown away, it may return the prior owner. To prevent this from happening, the former user must save vs. magic.
Posted by Phil Viverito at 10/05/2019 03:06:00 AM

Email ThisBlogThis!Share to TwitterShare to FacebookShare to Pinterest
Labels: 52 Weeks of Magic