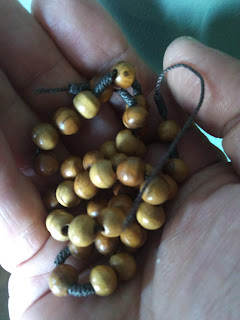 In my very first post for this series, Magic Lamps, I introduced the idea every day problems caused by magic. A magic lamp or a light spell doesn't throw heat. Back when we all lived in caves, we probably needed light more than heat. However, knowing you can make both is great.

This magic item is very common in the elven lands in the Peninsula of Plenty campaign. The first elves in the land were unwilling to cut down trees and as a consequence, used magic for lighting. This was not helpful when they were hit by particularly cool monsoons. The Peninsula doesn't often receive snow outside of the mountains, so when it started falling right after the cold monsoon season, the elves were in trouble. If they had wanted to collect wood, it was too late to identify the best wood and proper kindling. The first attempt at a colony on the Peninsula retreated across the sea because of the lack of fire.

Thus the need for Firebeads were born. Firebeads look very much like prayer beads. To make them function, the user pulls a bead off the end, cups it in their hands like an ember and blows on it. The bead will warm, then burn like kindling for two hours. The beads have an affinity for earth and ash. They will roll up to 3 feet towards earth and ash, even up hill. A typical set of firebeads will have 52 beads with one large bead or toggle at the end to serve as a handle.

In the elven lands, every household and every traveler will have one of these sets. In the human lands, they are highly prized treasures as they have not found a way to reproduce the magic. Creating such an item requires both a magic user and a cleric working in tandem.

Firebeads are interesting in the fact that they are a magical consumer product. They can burn homes down and they can inflict a point of damage, but only in highly contrived scenarios. For the most part, they are totally safe.

While totally common in the elven lands, they are a novel and highly prized commodity in the Empire. Most Elven-Human treaties involve the trade of Firebeads for Verbena, a powerful healing herb. These products are used to seal deals because they cannot be used as a weapon.
Posted by Phil Viverito at 10/20/2019 09:06:00 AM