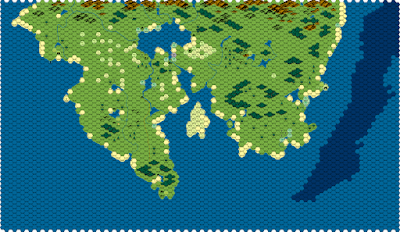 I'm working on a new map for the Peninsula of Plenty campaign using Inkwell Idea's Worldographer. The software is remarkably easy to use and makes the whole experience of world building a wonder rather than a pain. I went whole hog on this purchase and selected the $99.00 bundle plus Hexographer 1E World Style Icon Set.

Right now I am tinkering with the different icon sets and have a mishmash of icons. I hope to correct this and work entirely with the 1E World Style set for everything.

One of the nicest parts of the software is that once you have your geography set, where towns, rivers and road go make more sense. I've blogged about the 'Potamus Bay area before, but didn't realize how much was missing from the region. I detailed just a handful of settlements, but I envisioned an area that was both old and wild. That means more, but smaller settlements. The map now displays six settlements around the lake. A navigable river cause most people to refer to the lake as a bay, it actually is a lake next to a bay.

The southern most ruins is actually a double ruin. There was massive wooden manor house that had been burned to the ground, but a smaller stone folly remains largely intact. It has been settled by kobolds. They call themselves Tribe of Minwan after their king. Thirty-six miles to the west is the largest settlement in the area ruled by a Gerent. The area is nominally controlled by the Empire, but due to the lack of luxury, the local ruler is permitted to rule as he see's fit. Along the western edge of the lake are two manors, one which supports a town and the other which is a fortified house. On the eastern side, the north-most habitation is a small village which has sprung up around a miller and blacksmith family. The tiny house on the southeast of the lake is an ancient fortified house made of stone. It is tiny but well populated. 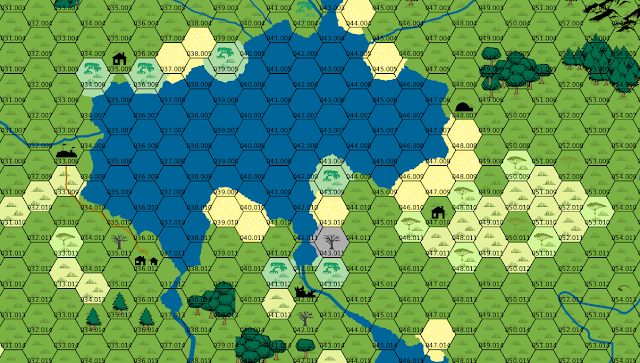 All this information basically wrote it's self as I used the software to make improvements to ideas I had kicking around in my head.
Posted by Phil Viverito at 4/11/2019 07:57:00 PM