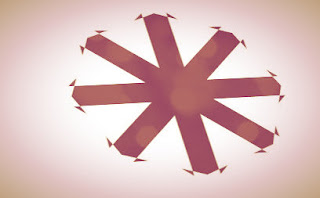 This weeks foray into magic is both a thing and a process.

The Shape of Memory is a ritual used by spell casters to better focus themselves to learn. The ritual invariably creates a small token of magic, "The Shape" but the actual item created is highly personal. This object, when consumed allows a spell caster to recast an orison, cantrip or first level spell as if it was on their memorized list of spells. It can be used immediately or saved for later. The spell must be currently on their list of known and memorized spells. The creation of the item does not cause the caster to lose the spell from their memory. The spell cannot be transferred from a scroll or book to "The Shape", it must be current in their mind.

Consumption is a qualified statement, the object may be eaten, drunk, burned, crushed, etc. The actual appearance of the object can be anything but tends towards care-free or whimsical items. Origami birds, a strange pattern inked on paper, a tint loaf of bread or muffin, a candy, a shaped wax candle, a tincture of herbs to drink, etc. In fact, the item produced will be as far away from the actual effect of the spell as possible, as if the caster was doodling mindlessly during the creation process.

The creation process usually takes all day as the magician makes choices about creation, but is not an all day process. The item has some worth, say a few coppers, but no one would call it art. The life time of such an object is usually 1 week unless special care is taken. Typically, the creator will have no more than 2 or three of these items available for use and sometimes the caster will use one to create a new one.

Any spell effect 1st level or under can put into the object, however most users will imbue the item with a knowledge based spell such a read magic or detect like spell. This is a practical consideration as usage requires an action which is best done while sitting or at least not looking at a target. The spells effect is immediate even if the consumption process takes longer. Usually such spells cannot be used in combat as the user is forced to make a non-combative action to activate it, but in rare instances it can be effective in combat. For example, throwing a paper token into a campfire can allow the user to immediately cast magic missile or light.

These items will NOT allow a different caster or non-spell caster to cast a spell but their use can cause confusion in this process. For example, a cleric who wishes to heal someone via this device may share a bite of a candy or loaf, but the target's action has nothing to do with the process. In fact, some people may find this action too weird to agree to, such as burning a token or eating a bit of candy. Only the caster's desire to do so is required.

This creation process is tied to the idea that there are many days where a caster will not utter a single prayer or spell and can save it for later.


Now, the commercial. I have a little book called Zero to Hero: Uncommon Commoners, over at DrivethruRPG. I am obviously thinking of writing another and Gnolls might be the subject. Please let me know what you think in the comments.
Posted by Phil Viverito at 4/07/2019 10:33:00 AM