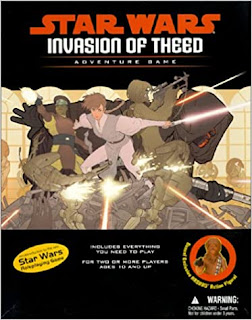 Title: Invasion of Theed Boxed Set
Design: Bill Slavicsek
Year: 2000
Pages: 2 32 page booklets, and 16 page character sheets folio.
Rating: 4 of 5 stars
Theed is the capital of Naboo and this adventure runs contemporaneously with the end of the film, The Phantom Menace. The party of up to 8 players fights to help the Queen free Naboo from the threat of the Sith Lord.
This set is a modification of the rules that appear in Wizards of the Coast's Star Wars: Roleplaying Game Core Rulebook. These "simplifed" rules cut out everything not necessary to run the adventure. It is heavily combat orientated, but other non-combat situations are addressed in a limited fashion. Characters star at level one and have the potential to level up several times during play.
This set features 2 game booklets, one for the rules and second is the module. Players are given gloriously detailed 2 page character sheets which also include activity prompts and a rule guide focused on their particular character. There are 2 maps plus 2 sheets of tokens. 0 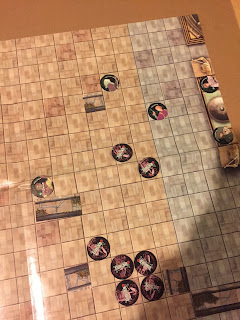 The adaption of the 200+ page d20 ruleset from the core book to simplified adventure game is more than adequate. As a fighting system, it is rock solid. Many items are pre calculated, such as experience. This takes a load off the Gamemaster and places it on the characters. Everything runs extremely smoothly.
Being an introductory set, there will be situations the players could ask about that is not included. A season GM would have immediate answers but a newbie would invoke "That not possible" for these few situations.
Being run alongside the events of The Phantom Menace, the players will notice that they don't really meet too many of the characters in the film and definitely don't interact with them in any meaningful way. It seems their insertion into the game was driven by IP consultants trying to sandwich in all of the content from the movie.
If you look at the cover of the boxed set, you can see that the artists were free of this concept. Not a single major character is featured there. But the created characters fit wonderfully with the theme of the film, like a second batch of heroes in this titanic battle. The premade characters sheets include a very minimal backstory, usually only to account for their abilities such as being a soldier or Jedi. They can be made into whatever the player has in mind for their character.
Lost on the back page of one of the booklets is a one page character sheet. This is a nice addition as it allows someone to roll a completely new character for the set.
There are only two flaws to this set. First, major film characters are shoehorned into the end of the adventure in a way that can never be canon breaking, which will give the players a sense of being rooked in victory.
The other flaw is only apparent if you have the Core rules. Scale is reduced to "squares" in this boxed which convert to a standard 2 meters in the core rules. So, when switching from this set to the main rules and back, invariably new players will screw up ranges by a factor of two. This isn't too bad, in my opinion. The Core set lists unrealistically low ranges for virtually every weapon. The idea that an energy rifle only covers "40 meters" or "20 squares" is somewhat ludicus. Forget the scale and just have fun. No one will notice.
All and all this is a great introduction to Star Wars and d20.
Sadly this set is out of print and not available in pdf.
Posted by Phil Viverito at 5/04/2021 12:29:00 PM