The Mac Is Not A Xerox Machine...

I thought it was the best sheet I'd ever made or used. Still pretty true. You can pick up this one for yourself on DriveThruRPG. This file is pay what you want and it is strongly suggest that you use it before putting any cash down. If you like it come back and drop some change in the tip jar.

Tonight I was looking at it and wished that I still had the disc it came from so that I could have the deep black lines the originals had. Well, I don't have that no matter how much wish I did.

But I still have a Mac. 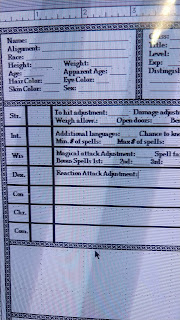 It turns out that either I have gotten much better at Mac Draw or the processing power of G4 is so much better than a 512K or Claris software has improved before its demise, that I can recreate this document. I started working on it tonight, I hope to have a new version done by Monday. Ah, Veteran's Day.

The new versions will be tacked on the old version of the file on DriveThruRPG, as a thank you to all the people who downloaded it. Many of you paid for it, and I really, really appreciate the support.

What you can expect is a faithful rendition of the old version, a new version with the classic 6 instead of 7 and a few bells and whistles add on, such as Acrobat Abilities added to the thieves table, a better encumbrance chart, AC chart, a space for mounts and pets, and a few other things.