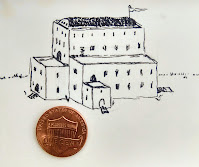 A few months ago, I purchased Inkwell Idea's Worldographer which is an excellent way to visualize your campaign ideas. This weekend, I released a new title called The Compass Rose Minisetting. This product introduces the Compass Rose Inn in visual form and brings to life long time NPCs from my home campaign. It is listed at PWYW with a suggested price of $1.99. It has been selling briskly since it's Sunday evening release.

This mapset is rules agnostic, there are zero references to rulesets. It can be plugged into any campaign setting or ruleset.

In August, a companion to this piece will be released. It will feature characters for D&D and AD&D, will contain more history, magic items and obviously, more maps. It will be offered at a $4.99 price point as a separate product.

In order to launch this product on time, I have placed 52 Weeks of Magic on a 3 week hiatus. Some of the magic items that would have appeared here will be included with this updated version of The Compass Rose Inn.

Additionally, These Old Games will be reworked during this time to incorporate posts from my 3 other blogs as they are being decommissioned at the end of this year. I simply cannot write, work, attend school, have a family and continue to update 4 different blogs.

I hope you enjoy these new features, as much I do producing them.