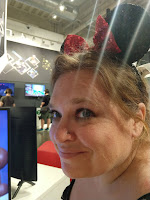 It started when Kitty wanted to ride horses. So one cold winter day, we were off to ride horses on a whim. Her horse was named Star and mine was called Chico. I can managed to mount a horse and saunter around, but I am far from experienced.

Chico was a majestic, deep brown horse, standing about 16 hands. I got on him like a champ. And I sat there for about 5 minutes smiling and admiring him as he admired me.

Well, no. He was sizing me up.

First, he twitched head to hoof. Then he spun, followed by a serious attempt to throw me. Since I was still attached, he took off like bolt of lightning racing over mud and snow, on the trail and then between trees. His final trick to get me off was to crash to a stop in a shallow pond and roll.

I managed to keep my seat through all of it, including in the part where he rolled over me in 18 inches of water, mud and ice. I somehow fell backwards against Chico's rump instead of being smashed forwards onto the pommel. Then we trotted back to the barn where the rest of the group was waiting.

I was terrified. So terrified, that the grin I had on mounting him was locked on my face. I couldn't speak because I had the wind knocked out of me. The people who were expecting a complaint or possibly a lawsuit were left the impression that I was completely unfazed by the horseplay. And off we went on the rest of the ride. Me, sopping wet, bruised and bloodied; others, happy, dry, and content.

After that, I was in with her. 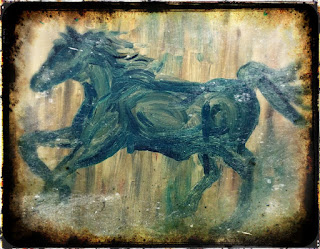