One of my favorite modules was X2. It was so rich in detail and called back to Poe and Clark Ashton Smith that I immediately wanted to plug it into my AD&D campaign. Well, it didn't work out so well. The theme of Castle Amber was too... "weird" for my normal campaign. It was the one time my players demanded a "redo". Their main characters had crossed the mists and as they explored the castle, they became disenchanted with this setting as their characters were way too out of place in it.

I agreed. We rolled up a new set of characters, restarted the scenario and began playing the module as if the prior events never happened. My players were so good at role playing, they willingly ignored the details they gleaned from the last adventure and let the action replay itself again for their new characters.

We were actually playing two different campaigns, alternating between them as the mood struck us. This must have been 1995 or 1996. We were still using the original AD&D books with Unearthed Arcana. When we switched from our main AD&D campaign to the world of Castle Amber, we took it to the extreme.

I allowed the use of Tome of Magic, I would quietly play Love and Rockets Body and Soul alternating with Glen Danzig's Black Aria.


Being older, I'd place a bottle of wine on the table, which few of us knew how to use properly, and old candle sticks or bottles with candles jammed in them for effect. Incense was burned and dinner or light snacks were had as we gamed.

On top of that, I produced a set of feelies for the players. They were old maps, journals and letters based on the action of the module. 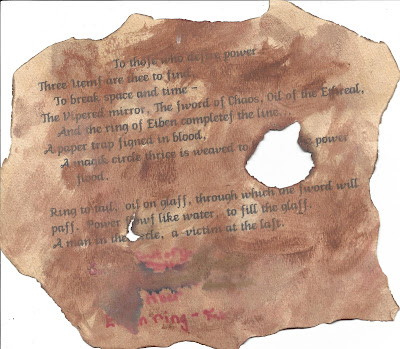 We never completed the module, because the players found the land of Averoigne to be so enchanting. If I could collect up those players again, we would totally go back to Averoigne.
Posted by Phil Viverito at 7/28/2019 01:05:00 PM