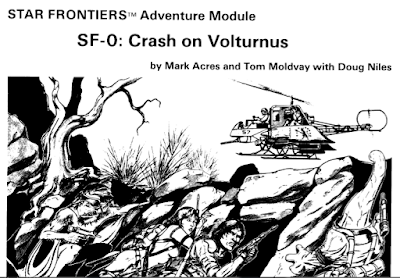 Crash on Volturnus is one of my favorite modules. The player start of as passengers on the Sierra Dawn, where they first encounter trouble en route to Volturnus. After an epic battle and escape, players move on to phase two, an incredible hex crawl on the planet of Volturnus culminating in a final(?) battle with the pirate forces on the planet. Aided by the local inhabitants of the planet, surely the players will win the day.

This module was released with the Alpha Dawn rules set and to my knowledge, was not released independently of that set. I received my set of Alpha Dawn rules peice meal and ended up with two copies of the module. The whole boxed set includes giant maps and wonderful counters, which makes SF-0 a snap to play.

Crash on Volturnus is the first module in the series and was followed up by SF-1 and SF-2. The other SF series modules are unrelated, but are valuable as they are set up for characters to continue their adventures in new settings. The series was also brought back to life by the Endless Quest book Villains of Volturnus in 1983. It was published in relatively short time frame making the series rock solid in game play and feel.

Having played SF-0 several times, there are few game breakers built in to the scenario. First, when the escape pod crashes, the characters only have time to get the survival packs. Several of my players started out with standard equipment packs and used the coveralls as a makeshift backpack tied across their chests before seating themselves. Since the equipment was attached to them, I couldn't justify taking it. The players also started with 4 medical kits, which made them neigh unstoppable in combat. They kept pulling back to heal. Of course, these were the same players who tied their equipment to their chests. I kept running them against random encounters to try to eat up resources, but that was unfulfilling. Eventually, I figured I'd let them run in god-mode and kill everything and everyone. Many of the challenges they faced were thinking scenarios and not fighting scenarios, so it really didn't change the outcome.

All and all, I found this one module to be the best of the best for Star Frontiers. What do you think? Let me know in the comments.

The whole shebang is available over on DriveThruRPG.