First, I would like to thank Patrick for following me over on Ko-Fi. Following me over there is completely free and you'll pick up some insight into what I am working on.

This evening, I'm working on a map for my upcoming project. I decided to start big and get smaller. This map of the capital is 50 feet per hex. In this view, you probably can't see the hexes.

Obviously, the capital is on the coast and is desperately in need of a name. Worldographer has the ability to generate maps via a seed process and some pretty cool tweaks you can select at the beginning. It will happily layout streets, drop in houses and businesses based on population plus a few other things like foliage.

To make the process more manageable, I cut the population to 1000 so the area is sparse. As I work through the city, I'll add buildings in neighborhoods flavored by the underlying terrain.

In this campaign setting, the city has been at peace for decades. They have gotten a bit sloppy with the trees and buildings close to the walls. I plan to remove a lot of the trees as I work, but there needs to be a balance between clearcut areas, the possibility of sloppy care, and being visually pleasing.

This is a fortified city with the majority of people living outside the walls. Inside, there are garrison houses, towers, and a citadel for defense. I am picturing 40-foot tall walls, and 50-60 foot tall towers. The citadel was built first, before the city. It is ill-suited for its location as the citadel walls are only 30 feet tall. The central tower is 50 feet tall, which is not high enough to see over the walls.

But the citadel has a magical defense. 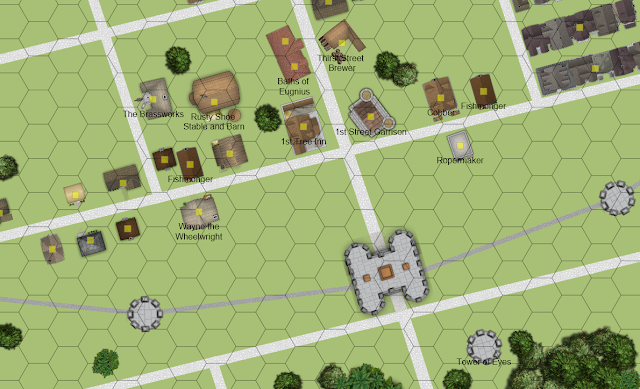 While this special vision is an illusion, as are the Towers of Eyes, the defenders can reconnoiter the whole area from a place of safety. While it's impossible to interact physically with the Towers of Eyes or the area it views, it is said that magic users can hurl spells down on to anyplace near the Towers.

Email ThisBlogThis!Share to TwitterShare to FacebookShare to Pinterest
Labels: Capital, Ko-Fi, Peninsula of Plenty, Thank you