On Day 107, we get cracking on those Stasis Units we picked up from e103. In the first stasis unit, we find a wounded pilot. The medics lead him off to the crew quarters.

The next unit is more problematical. We open it and 4 guys jump out. Based on the last encounter, I’m going to decide that Duke tries to talk to them. Everyone except the medics and the newly found pilot are here.

The bodyguards open fire. They have the following stats:
Marksmanship: 4
Melee: 1
Endurance: 6
TL-5 side arms.

Duke makes his cunning roll and they do not surprise us. Lucy, Ratchet, Jon and Mike all have TL-6 side arms so they shoot first. All of them hit, but only Lucy scores a critical. 3 of these guys take a single point, while the last takes 5.

They return fire. They shoot at Duke, Mike, David and Lucy. Each needs a 9. Duke, Mike and Lucy are hit. Duke takes 3 points as a critical, while the other two take one point of damage.

To finish the round, Duke, Lefty, Deadeye, Emily, and Audrey shoot back with heavy weapons. Ace shoots with a TL-1 side arm. All four guys go down in a hail of gun fire.

We call for medical help and all of the wounded, including our newly found pilot, are transported to the city for treatment. This is expensive, but it avoids encounter checks. We pay 600 for the service. 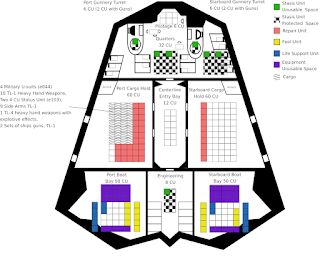 On Day 108, Emily brings the ship to the city to pick up Duke and the gang. Nothing really interesting happens. On entry to the city we have a chance to sell TL-5 or six side arms, but the crew doesn’t want to sell. This is a rest day for Duke, Mike and Lucy.

Emily makes her rolls for the ship as we would like to sell these TL-1 level weapons. No deal on those, but we do get buy life support (1 secs. base), repair units (2 to buy, 1 to sell) and fuel (1 secs. to buy and sell). Twice, each actually.

This creates a dilemma for the solo player. If a player first makes all of their rolls for the day like I did, effectively, they can see the future. So, in order to blind myself, Emily decides to purchase 10 each at the first transaction, then possibly sell some on the second transaction if the price is right.

The first round results in Life Support for 3 each (30 for 10), Repair units for 2 each (20 for 10) and fuel at one each for a total of 10. This is due to the price multipler. We paid a more for the LSU, and base price for the other two. In the second round, the multiplier is 1, so we would lose money if we sold, so we don’t. A player can always refuse to buy or sell based on price, the problem comes in when you know that you have multiple chances.