Star Smuggler was a set of rules with two small booklets. The rule set was a 24 page booklet which included everything you needed to play. It was seamlessly integrated with a 20 page event booklet. In doing some careful analysis, I have yet to find a mistake not covered by the short errata sheet.

One of the fascinating things about the rule set is how well it plays off the event booklet. One of the complaints about this game is the number of "game breaking" events that can end your game via a single die roll. Well, those are flaws, those are features of a choose your own adventure style book. 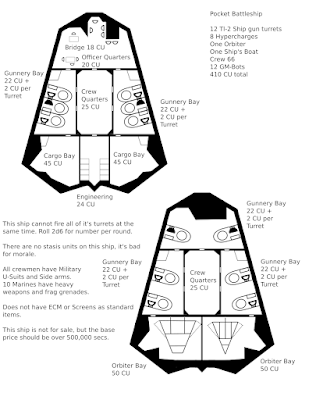 Within the events booklet are hidden 30+ new items for the player to enjoy or be challenged by. They range from axes to battleships and when such items are stat'ed out, they never break the system laid out in the rules booklet.

I'll be taking a look some of these items, as this system can easily be fleshed out into a full rpg, complete with a campaign setting.

The first surprise I would like to look at is a ship described in one of the events - The Battleship. This is a TL-2 ship with 12 turrets and 120 hits. It's a beast. I took the time to stat it up in the normal parlance of the game. To say it's OP is an understatement, but Duke can be victorious over this beast with careful game play.

Using the basic ship, the Antelope, I extrapolated what a battleship might look like. I'm not happy with the re-skin of the Buffalo Transport, so I will be revisiting this ship's layout soon.

The first conclusion that I came to was the fact that this might be a Pocket Battleship. The limitation comes from the description of the ship itself. It's TL-2 ship, which is pretty weak.

Even so, it is a massive ship. The Pocket Battleship is 410 CU in size and it's the largest ship in this image. The Antelope is the smallest ship. 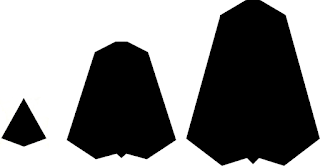