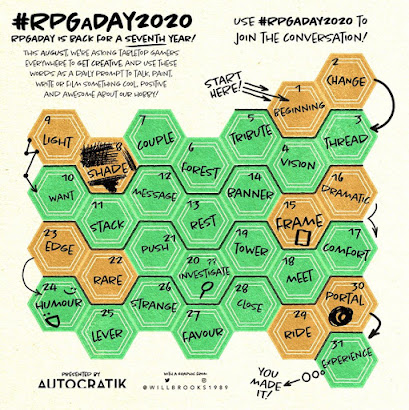 Well, this year's RPGADAY was quite the experience. I got to revisit the forest where my kids and I camped and hiked. I now understand the connection between my love of roller coasters and D&D, and finally wrote down my table rules for magic weapons, in three parts. (Part 1, Part 2 and Part 3.)

The idea of investigation is hard coded into all of my RPG play. People do things for reasons, good or bad. When I have a bunch of people sit at the table, I don't have any idea of what they mean to do. I have to investigate.

Coffee or Pop? Pop or Soda? Lots of role play or lots of dice? I have no idea at the first meeting. Once I start to feel out the players, investigate them, I then know.

For this reason, I tend to put a lot of features into my world building. I offer some details but not all. The players, if they are so inclined, can investigate any or all or none of them.

If I present an evil cleric at the head of an undead army, it is on the players to figure out the best course of action. If they are all hack and slash, investigation is limited to what weapons work best on undead. On the other hand, I have already thought of a goal and reason for this tactic used by cleric. It is equality valid for the players to figure that out, too. 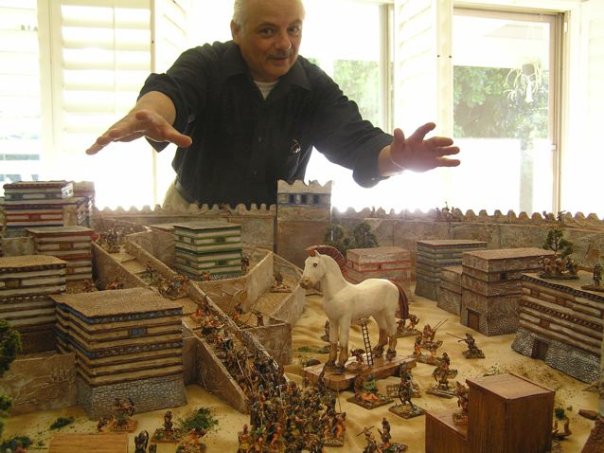 In game play, what can you do build a dramatic scene? If you're my dad, you do the above.
Not everyone has those resources. What if you are doing purely theater of the mind? What can give your players a sense of tension and drama?
Here are some of my favorites when playing D&D.

1. Use Morale. Morale is an often ignored mechanic. It usually means someone runs away from danger, not in to danger. But by basic definition, it means someone is confident or not. Perhaps over confident.
Make your monsters and villains act accordingly. High morale causes cockiness. Let some of your antagonists miscalculate the situation. They start of with no weapons, then pull out the big guns as the players take away some of that spirit.
Mechanically, as the villains lose hope, you could start putting minuses on their attack rolls before they actually break and run for it.
2. Force the players to use a caller. A caller is there to help the DM run through a routine set of tasks. By forcing the players to use a caller, it creates the expectation of routines. Everything has a place and an order. As the DM establishes order and the caller implements it, taking it away leaves the players on the edge of their seats. Bypassing the caller by saying, "Ok, Ted. What will you do?" is jarring. It also needs to be reserved for truly dramatic effects.
The inclination of the DM to impose this sort of chaos is usually a negative thing, but it doesn't have to be. Indiana Jones vs. the Swordsman is a classic example of having the character's routine actions changed in a positive way. Laughter is an expression of intense happiness, just like sweating is to fear. Whatever you do, taking away the established routine of a caller can really elevate people.

In all cases, it's better to remove a social convention such as the caller than it is change a game mechanic to pump up the drama.
3. Failure isn't death. There's the old line, "A fate worse than death". Nothing jolts the players so much as moving the goal post. Suddenly, it's not about life and death, but something more upsetting.
A good example of this is the characters are fighting on the rooftops of a town. The danger of falling or dying is ever present. Imagine how they will react if they realize the reason they are up there is a rouse to get them away from gates as the enemy pours in? What if their long time friend is dragged into a wagon on the street below? That changes the dynamic. Instead of win or die, the situation is about escape or die or pursue or lose a friend.

4. Abuse the button. The first 3 items throw the players into an elevated state, physical responses are not in tune with reality. No one at the table is ever in danger of being eaten by an orc, but if you get the player in the spirit of things, they will be sweating about an unreal situation. And you can use that to really lay on the dramatic.
With TV shows and to a lesser extent movies, the biggest dramatic moment is the cliffhanger. Now, if you tried this with a run of the mill combat session the players would be confused. However, you can fake it. When the party sets of for the big brawl, you slam your book closed and announce:
"Well, this is as good a place to stop as any..."
This is the exact the same trick the grandfather pulls on Fred Savage in the Princess Bride. And you should play it as such. "Ok, I guess we can play this out. If you don't mind." Don't actually force an ending on the players. But if you abuse that button and it works, you know you've got the party's attention.

These techniques of abusing the button can be for good or ill.
If the party is trying to do something quietly, start whispering until the proper wham moment arrives. Then make it a literal wham. You don't need to shout, you can simply go back to a normal voice.
In an outdoor game session, I pretended to be distracted by the cicadas' buzz. It goes up and down, and starts and stops suddenly. I kept it up all session, forcing the player's awareness of the noise. When cicadas naturally stopped, I leaned forward and said, "All of the forest's sounds stop." Their eyes got really big.

This is a very strong technique. It needs to be used with care, because if you put the players on the edge of their seats, kicking them too often isn't a good idea. Nor should these moments always lean to the negative. As much as you can shock a group, you're main effort should be engaging the group.
Posted by Phil Viverito at 8/16/2020 04:30:00 AM No comments:

What to do with this one?

Have you utterly sent the wrong message to the players? Have your players misinterpreted a message and decided to play another game?

As a DM, this is frustrating because usually a message, especially a written message is supposed to be super clear, totally unambiguous.

My last campaign died of COVID-19. We have no particular plans to start up again. But it was suffering from a horribly ambiguous statement I made. I gave the characters a note which said they were to receive 5,000 pounds silver. I actually wrote it down for them.

This one was special, I cribbed it from history. I pieced together details from a couple of manuscript and books on the death of William the Conqueror. The oldest son, Richard received all of Normandy and the William Rufus, the middle son received the Throne of England,

"...while Henry received five thousand pounds in silver, which he hastened to secure, having it carefully weighed out to make certain that none of his appanage was denied him."
~~Anglo-Saxon Chronicle (Peterborough MS)

So Henry ran off to count his money. These documents have a biting edge that amused me and I thought that it would amuse the players to see something like this.

It did.
Except for one little thing. As I pieced together several documents to get the flavor right, but forgot the actual message because this often occurs in these historical writings. You have to piece together several to get a good read on the actual message of the author. Clearly, they are taking pot shots at their leadership. They also have pretty low opinions of them, because these families are clearly fighting with each other.

William the Conqueror left these funds to Henry so he could purchase his own lands... but only left Henry enough silver to purchase about 1500 acres or 2.3 miles. So, Richard got Normandy, William Rufus got all of England and Henry got some silver, which is nothing when compared to what his brother's got. Talk about sending a message!

Unfortunately, just like the Chronicle above I forgot to name the purpose of the silver, leaving the party with a ridiculous sum on paper. They were to buy or rent a ship with it. Worse, the way I phrased it, the players never actually got their hands on the physical silver, just a letter from the Emperor promising the silver to whoever was reading it. So, the party could show the letter saying they were to have access to 5,000 pounds silver worth of goods and then nothing... For relatively small purchases, no one would take this letter from the party. The party wrote out an IOU from the Emperor's treasury, which is hysterical when you think about it .
And boy, did they use it to the fullest.

Welcome Back! Episode 4 has dropped.
In this episode I talk about RPGADAY, change, kobolds and Mrs. Todd. The scripts are gone, as is the music. I hope these changes create a better listener experience.
While I have done away with Mr. Kevin MacLeod's music, I hope you take a moment to go check out his music at incompetech.com. In addition to his music, he also has a graph paper creator which could be beneficial to any type of game. He has all kinds of good stuff over there and I hope you make use of his tools and download some of his music.
This episode touches on history, both Roman history, my personal history and gaming history.