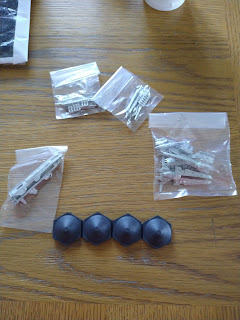 I need to lay off the credit card. In just a few weeks or less, my OSE set will arrive. I can't wait... but I have some games that I can't play and review due to a lack of minis. Yes, I'm playing the "not enough minis, even though I have a ton of unpainted minis" card.

I decided to try out Studio Bergstrom. They have a series of ships called "Galactic Patrol" that are not specific to any TV or movie I have seen. Honestly, I haven't seen them all even though I've tried. The 11 ships I selected set me back $55.00 before shipping, which makes the math nice. $5.00 each on average.

With these first 11 ships, I want to practice painting. I figure I could come up with a nice paint scheme and vary the scheme by changing the base or detail colors. These 11 will be my base squad with one set of colors and the next order of 11 can have slight changes to create either a different squadron or an opposing fleet.

(It occurs to me that I should buy a nice camera to take pictures of my models. Maybe if I stop buying models.)

Now, I didn't pick the largest ships available, I selected what I thought looked good for a matching squadron.

Now that I have them, I was surprised, perhaps shocked, at the level of detail on these models. My poor photo skills do not do them justice. What had started as a lark to get back into painting brought a smile to my face when I realized that these models might be moderate to difficult to paint. At least for someone like me who has degraded skills. They aren't starter models, they are amazing ships.

Many of the ships come in two parts, top and bottom hulls with additional turrets and details.

The largest 4 ships came with silicone bases. These ingenious little things allow you to ram a pin through the base to mount the ship. I'm not sure if the pin's pointy end should pass through the base to the bottom of the ship or the other way around. Either seems like a fine idea.

I should have taken a better picture of the whole group of ships. Anyway, I will take more pictures as I get some paint on them. And they will feature in some of my upcoming reviews.