Question From The Hive Mind - Variable Damage in B/X 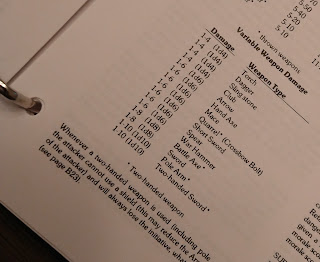 Ah, the dreaded Variable Damage "option" from B/X. Variable damage mucks with so much, but I can't see any other way of having it. If I said it once, I've said it a million times... I've always used a blend of B/X and AD&D so variable damage was baked right into my campaigns. But I have used both.

(So was double damage for a 20. I tried fumbles on a 1 exactly twice. Fumbles suck because they make no sense. Aggression against a critter results in harm to the aggressor... hmm. No thanks, it weakens everyone.)

Under B/X, a character did 1d6 + strength bonuses, which could be up to 3 points for an 18 strength. The average of that was 3.5 plus 1-3 extra points. It's simple to compare a 1d8 hit die for a monster to an average character. The average roll on a 1d8 is 4.5, so your average adventurer probably wouldn't down a monster in one mightly swing. They would do it on two hits. Or if profoundly unlucky, five hits. A fighter might do it in one due to those bonuses, but many other player characters are punished for taking a high strength over something else.

Looking at the variable damage table, only 4 weapons do 1d8 or better. Using only the averages of die rolls, a guy with a sword or battle axe should take out a 1 HD monster in one round. A polearm or two handed sword would also do it, at the expense of having a lower AC meaning the montser could hit you a little better. Against multi-hit die creatures, the two handed sword or pole arm is a clear winner.

But adventures have a variety of hit point dice which makes a PC getting hit different from a monster being hit. A Dwarf and Fighter were on par with monsters, they are combat beasts. Everyone else is worse than a 1 HD monster, but had some control over their AC or the use of special abilities to make sure they weren't outclassed. Basically, PC control the pace of combat to remove the possibility of a creature taking a swipe at the squishy 1d4 Magic User or Thief.

Monsters are all over the place when it comes to damage. They get a number of attacks plus a damage die for each. They are not ruled by the 1d6 non-variable damage rule, but they are balanced for it. There is a tendency to give 1 HD monsters 1d6 points of damage or no better than 1d8 or 2d4. NPC Elves are an anomaly, getting 1+1 hit dice and 1d8 for damage. They must be seasoned Elves.

There is a balance of character power against monster power in B/X when using standard 1d6 damage rules. But the balance shifts when variable damage is allowed. In the general form, by increasing some damage, I am expecting monsters to lose 1 round of combat survivability. A 1 HD monster should survive two rounds with 1d6 points of damage, but when that shifts 1d8 points of damage it means they survive one round less or just a single round.

The dynamic stays the same for multi-hit die monsters but is a little more fluid as the actual die rolls will change things.

In switching to variable damage, a couple of "other things" happen, all of which follow the form of "begging the question". It creates a logical flaw. A fighter might question why an axe to the head does different damage for a big axe or little axe. Isn't it lodged in the target's brain?  All Magic-Users are now limited to 1d4 hit points of damage, they don't get missile weapons (except for thrown daggers or darts in AD&D), and most importantly, they can't wield a sword like Gandalf.

In my mind, the last item is most important but let's skip that for a moment.

What variable damage does is weaken Magic Users to 1d4 or 2/3rds of the hitting power. It also brings up "what is a hit point?" If some weapons are more powerful than others, but all are lethal, what does a hit point mean?

To me, it means that characters and monsters possess an inherent "toughness". Not like the toughness of a wall that just stands there taking abuse, but an ability to shake off stuff that would make other people lay down and quit. They aren't dead, destroyed, or whatever, they merely can't rise again. Some of this "toughness" is just luck meaning a hit isn't exactly a hit either. It could be a miss that forces someone to stumble and twist a knee.

In taking this view of hit points, I can give swords back to Magic-Users as a modified standard damage rule. They can never do more than 1d4 points of physical damage because they either don't have the right weapon or the right training to do better. I suppose I could up this to 1d6, but I feel that makes Thieves less combat savvy than Magic-Users.

As they should. In the Basic game, everyone hits the same as there is just one table. In the Expert rules, we see a shift where Fighters hit more often than Clerics and Magic-Users hit the least frequently. Aside from this one detail, I have totally ignored the ability to hit focusing only on the damage done.

One thing about Gandalf, all versions of Gandalf, is he only uses a staff or magic sword. He doesn't even get a dagger like a Magic-User. In live-action films, he isn't a swordfighter. He tends to foil attacks with the sword, use it as a magical prop, or swing it a club. He does not look like any other swordfighter I have seen. Because he isn't. And I am happy to let my Magic-User Player Characters behave like this.

I permit Magic Users to use swords. I immediately describe such an item as being both magical and not a weapon. It is more like a personal fetish, a device that is possessed by a spirit of power. They do 1d4 for damage but don't have to be set down to the cast. This allows the player to have the "flavor" of the weapon without a significant bonus. I also encourage the Magic Users to have a sigil or power glyph on all weapons. They believe the item is there for the power, therefore it is marked and useful. The marking only really identifies the weapon as suitable for a magic-using person. In my world, silver weapons count as "magic" because they have some attributes of magic or special weapons, so this might crossover to ones meant for Magic-Users.

One bonus that I confer to all Magic-Users with any weapons is, if someone steps into melee range, they can abandon a cast spell to swing that weapon without losing the spell. A hit still foils a spell and they lose it. As an item of power, it assists them to switch tasks from mystical to physical but isn't a perfect defense. The reverse is not true, they can't switch to casting once the weapon is swung. They have to wait for the next round. They also have a defense to use in retreat. Someone without a weapon has nothing and is going to get hit or chased if they back up. 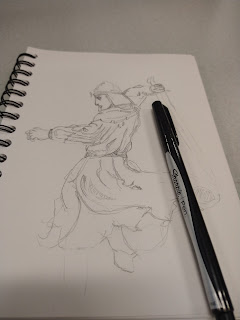 There is a couple of advantages in having an ill-defined definition of hit points that variable weapon damage causes. One, it really doesn't deviate from the rules too much except for shorting the staying power of monsters and NPCs. Second, it permits flavoring to settings because the concept of hit points is softer. You can easily tack on other rules like natural 20s do double damage or -10 hit points is death. I personally use the -10 hit as death because makes everyone tougher, it forces the players to either verify the kill with a coup de grace which eliminates the need to create an endless parade of suspiciously similar NPC because the original guy got back up. Having that padding softens the blow of a bad hit point roll.

The flip side of this is, 1d6 standard damage allows for different sorts of creative add ons. The rule basically says anything is a weapon, torch, stick, or sword which makes Magic-Users tougher because those daggers and staves do the same damage. You could spin this into a high magic campaign where Magic-Users and magical creatures can do 1d6 of damage with a thought or glance. Who cares if they don't physically use a stick to poke the target? That's really kind of cool and can only happen when you have a very stylized or abstract combat system.

Variable damage or standard damage are both effective methods of play, which one you pick is based on desire and need for the campaign.