Update - This post has been expanded into a short book with 4 maps on DriveThruRPG. It's priced at PWYW, with a suggested price of $1.99.

Like the Compass Rose Inn Mini-Setting, this set of maps and descriptions are rule set agnostic.

This map is of a folly in the southwest of Potamus Bay. Who built the folly is lost to time. There is a larger ruin closer to the Lake, but it isn't as well preserved or interesting as the folly. 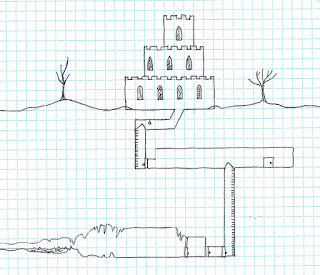 The tale of the folly's preservation is very odd and owes its history to the river. The river is subject seasonal flooding and one of those floods brought the kobold's to the folly.

The kobold's had their own underground village, which made them very happy. They stole the best food, killed the prettiest animals and had wild political intrigues that often ended in bloodshed. One day, the ruling clan pushed the wrong buttons and were tossed in prison to await their doom, as soon as the method could be decided.

A chance rainstorm freed the rulers, but washed them deep into the cave system. The village rejoiced at the apparent deaths. They were very kobolds happy, indeed. The ruling clan was washed away into the cavern system under the folly. They were able to squeeze and claw their way into the basement of the structure. The family rejoiced when they discovered the ring of pear and apple trees, the fresh water and rabbits.

Over the years, they have set themselves up a kings and queens of the folly. They do not understand the principle of a folly, they believe that human or elven kings hold court in an empty building. The six rulers have set themselves up as the High, Middle and Low Kings and Queens. They receive guests through the windows, as there are no doors except trapdoors between the levels. They keep the folly up, but they do not live in it. They live below in finely finished chambers. Recently, they have hung curtains in all of the windows of the folly, purple, yellow and red. 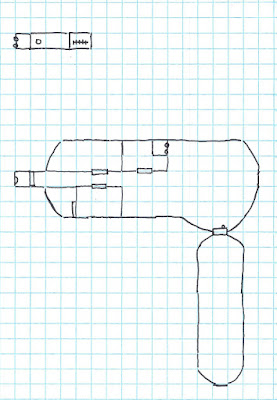 The family plans on enlarging the chambers, but for now they are satisfied.

The lowest level is almost all natural, only the eastern side has any finished features. The western side is often flooded with fresh water and sometimes contains fish.

Folly Details:
One Square equals 5 feet.
Height: 45 feet.
Depth: 75 feet below ground, as near as anyone can tell.
Population: 17 adults, 33 children.
Posted by Phil Viverito at 5:07 PM No comments:

Here are some draft ideas for a spaceship, perhaps a snub fighter. I will ink this one at some point but the design idea was fun verse realistic.

The initial design was rather slight. 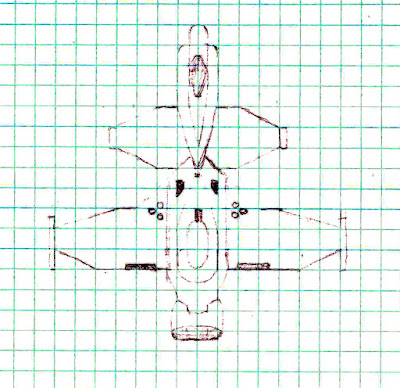 A few details that I wanted to look at where the cockpit and shielding for the crew. The movable panels came from details of the drooping nose on the Concorde. 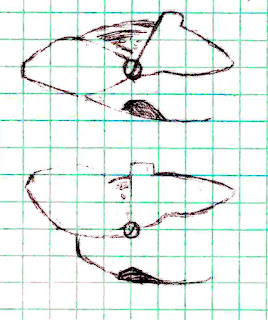 I decided to make the ship beefer. Those rounded rectangles are fuel tanks, not engines. Although parts are rounded, this ship is not aerodynamic. 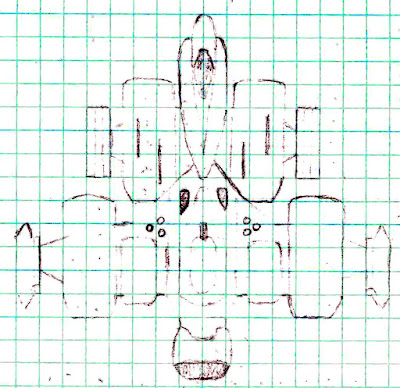 Each square is about a meter, so the ship stands 8 meters high. It is loaded out with 14 missiles, a centerline minigun and two large wing tip pods. There are 4 retractable radiators, the items with the 2x3 grids on them. 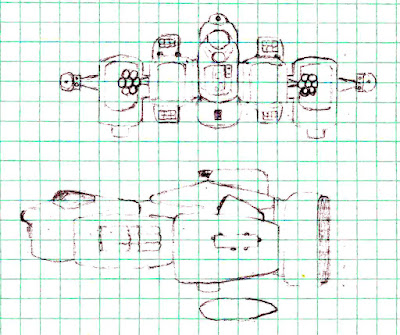 I hope to revisit this design again with ink, smoother lines and better proportions. This ship would be good in several rule sets like Traveller or Star Frontiers.
Posted by Phil Viverito at 8:33 PM No comments: