Copy, Paste, Flip, Cut... The Countdown is On

If you look over to the right, you'll see the countdown is on. We are set to return home by mid-April. 54 days. That means a lot of things.

Due to the time of year, everyone here is hauling ass. Nate and Cat have the school play the first week of March. Weddings are in full swing, so they are doing double duty with practice and work at the banquet hall. My older son is off with the Air Force Reserves, in and out of the house as duty dictates. My wife and I are starting new jobs.

Things are getting real.

The biggest change is that we won't have time to game much at all. Rather than go on hiatus, I will still have time to do some reviews. I also want to show off some cool stuff I have received from people who reached out after the fire. I should have time to post every week or two.

Before I check out for a bit, I wanted to show off something I put together today. I love the game Star Smuggler, a solo game created in the 80s. It's like Traveller Super Lite. You can download and print it from Dwarfstar Games. 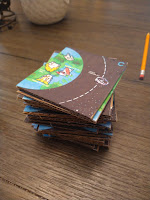 One thing that always bothered me about the set is that the tiles used for the planets forced the player to invert one tile or another to create the necessary planets. Last night, I decided to correct that by flipping every tile with Gimp. This afternoon, I printed them out and pasted them on cardboard.

It took forever. You see, the problem was each tile has text and numbers which are backward if you merely flip them. I went in flipped the words the right way around.

It wasn't until I had the whole set printed and mounted on cardboard that I realized the high production value of the artwork included with this game. Everything lines up correctly.

When you look at two A tiles side by side, the available paths line up because they are mirrored. And the continents look like a Rorschach test. But that is not how they are supposed to be used. 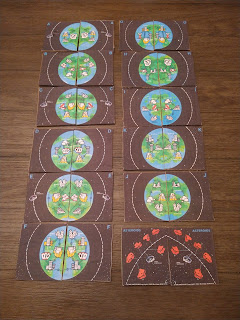 You're supposed to match up left and right tiles according to the rules. For example, the Planet Regari uses tiles K and J while Palatek uses A and C. 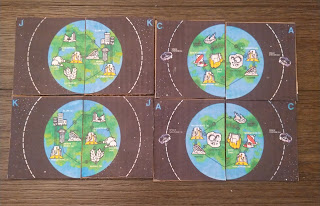 Not only do those match, every tile matches. That's brilliant! Tom Maxwell, who did the art for the tiles was a genius. I love it.
Given that I won't have much time on my hands in the next 50+ days, my gameplay will be limited to solo games like this one. Physical tiles make it so much easier.
Thank you, everyone, for everything. I will be around but probably not as much as I'd like.
Posted by Phil Viverito at 2/19/2022 09:05:00 PM No comments:

I love books, but the oldest and the newest stuff is hard to get in print. Invariably, I wander DriveThruRPG ordering stuff left and right. It never ends. Once I read through something, it goes in one two places: into a hard copy or stays in my "Library of (Digital) RPG Titles" on my Kindle.

Qualitatively, they are different places. One I expect to read again, while the other is something I might want to read by candlelight after the Nuclear Apocalypse.

Anyway, reading preferences aside, printing books yourself is really dependent on your printer. I have an HP all in one inkjet printer. It's good for most things, most of the time.

In the picture on the left, look how sharp the text is. It's really nice. Perfectly acceptable for reading by nuclear candlelight. Inkjet are very good on plain paper for text. You can see a little blow through because I printed two sided, but it's still very legible.

What inkjets are not good at are large, color images on plain paper. Things could not be worse. And since I print a lot of my own stuff on plain paper, the result is less than satisfactory.
Here is a photo of Cult of Diana: The Amazon Witch for Basic Era Games by Timothy S. Brannan. I just love the covers of his books and this one is my favorite. 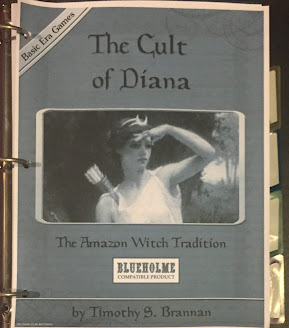 And with inkjet on plain paper, it just sucks. Can you say mud? How did it go so wrong?
It's the paper.

Check out this next image. It's the same printer and settings, except I used photo paper. 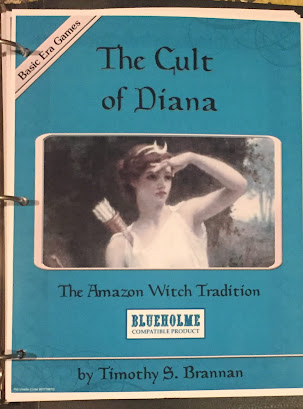 I'm very happy with this one, the colors are much brighter in real life, but I didn't want to alter the image with different settings to accentuate the colors. Where I went wrong is selecting my favorite cover rather than one that would highlight how good good can be.

Take a look at this next image from Mr. Brannan's The Basic Witch: The Pumpkin Spice Witch Tradition.

That 100 times better. We have blues and reds, and stuff in between. I can totally see the how this is different than how it appears on screen, but even using my cheap inkjet printer, the photo paper gives it far more color than plain paper. It's far more satisfying.

Hot Products - Dishonored, City of Nexus and The Halls of Arden Vul

It looks like the hot product tool for Affiliates is a little broken on DriveThru. For the last week, the site has been telling me that City of Nexus is the hottest new book, while logging in displays Dishonored as number one.


How annoying. The other day I decided to make up my own links to products I like. They are over on the left hand column. If you want to read how I was able to get a neat little box for a website from data on DriveThruRPG, click here for the tutorial.

What seems to be a truly hot product is The Halls of Arden Vul, in many different forms. Below is a picture and a link to the complete set PDF, all 1,100+ pages.

I'm probably going to order the maps for now (Volume V). I love my artwork and the artists on this product are incredible.

Here are links to the whole series:

In looking up this information, I found a bundle pack for $275.00. I don't know... it's almost like they gave me a MEGA-amount of information to process.

The bundle pack is a PDF of 1,100+ pages and a physical copy of Volumes I-V. The "complete" PDF is the aforementioned PDF from the bundle pack. If those entry points of $109 and $275 are too steep, ordering the first four volumes individually, entitles you to a copy of that 1,100 page PDF. Additionally, if your order the $109 Complete PDF, you can receive a 33% on print copies of the individual books at a later time.