I expected to be done unpacking a while ago. If you've ever moved three times in a 12-month period, you'll understand why it isn't done yet. That and the lilacs are in bloom, the sage, thyme and dill is running wild in the garden, and I've spent a lot of quality time with the family. 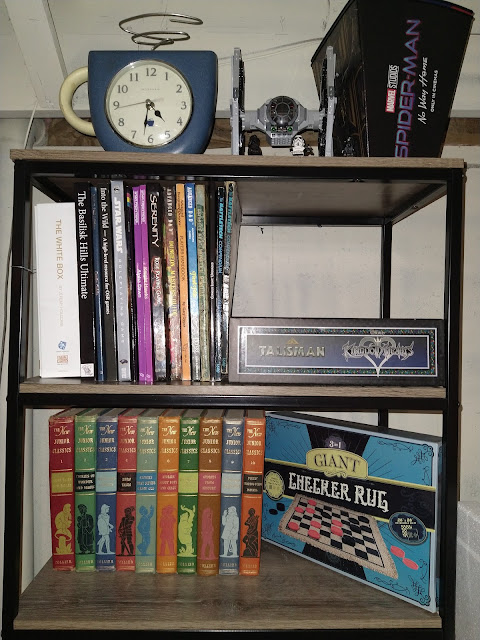 The fifth shelf is at eye level which is why I started with it last time.  I'll hop up to shelf 7 because it has the smallest number of items then move on to shelf 6.

Like shelf 5, it has some family remembrances. The popcorn buckets are from Spider-Man: No Way Home. I took Paul, Nathan, and Catherine to see it back in December. It was the first time we went on a family-fun outing since COVID started. My wife, Kitty, elected to stay home which has its own story.

The short version is that my wife sent us out to see it twice because they kept giving us a free bucket of popcorn when we left. She doesn't like superhero movies but enjoyed No Way Home best.

The clock is nothing special, other than I like blue and coffee. The T.I.E. Fighter was put together when I had to hang out at the house on an especially cold day while waiting for the gas company. Click the link for the assembly gallery. 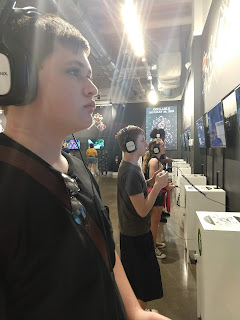 Shelf six has some great stuff on it.

On the right is the game Talisman: Kingdom Hearts edition. I have to review this one someday.

Kingdom Hearts has a special place in our hearts as a family. It was THE GAME all three of my children played. Kitty is a Disney nut and this totally won her over on gameplay for children.

Three days after Christmas in 2018, we scored an opportunity to play a pre-release version of Kingdom Hearts 3 in Disney Springs. We got several tries at Toy Story and Olympus each. They had a virtual queue and all kinds of merchandise.

The KH characters apparently don't appear in Disney World. However, you can have a bit of fun with them. At Be Our Guest, my daughter asked if the Kingdom Hearts characters ever appeared in the park. Belle put her hand on my daughter's shoulder and whispered, "Kairi's sleeping, dear."

Anyway, the rest of this shelf is full of stuff I have reviewed, other items I want to review, and a few items I will never review. The list of "never review" is short: all of the e1 AD&D books. There is really nothing I could say about them that hasn't already been better said by someone else. Since they were the first thing I wanted to replace, obviously they are a favorite. When I speak of D&D, e1 is probably injected into those comments without even meaning to do so.

I want to review The Basilisk Hills Ultimate, Knight Hawks, and The Castle Guide.

Strangely, Star Wars and Battletech are tied for my favorite rule sets. Star Wars is d20 or 3 point something D&D with a cool HP system. Battletech is a fast and frantic system that is easy and fun.

Cepheus Light has my mind and heart for having the coolest name.

Anyway, I have a couple of more shelves to fill.

I have six shelves to fill. I thought it would be interesting to make a post about each one as I fill them up.

Today, I filled shelf five. Why start at five? It's at eye level. 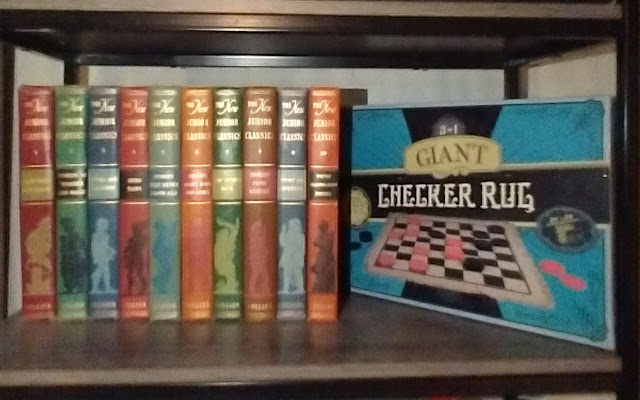 The books are a favorite of mine. The image is blurry, but the title reads: "The New Junior Classics".

It was published in 1912 by Collier as an answer to the 51-volume set of Harvard Classics. They are contemporaneous publications, one for adults and one for children.

My grandfather purchased a set for my father in the 1950s and of course, my dad gave it to me. While mine was lost, I have made an eBay investment so that my children may each have a copy. It is not as pricey as you'd think, but even at 10 times the price, I'd do it.

Just reading through the titles of each volume sparks ideation. I can't tell you how many ideas have leapt off the pages and into my D&D campaigns. They are really good for that sort of thing. My personal favorite is Tales from Greece and Rome.

On the right side of the shelf is a family favorite, rug checkers. The story about it is here in a post from September of last year.

I mentioned this post to my children and they issued a correction. Darien Lake, both the theme park and the State Park has a set of checkers like this. So do all of the Boy Scout Camps we've ever visited.

Yes, this simple checker set gets a premium spot on the shelf.

I should be emptying boxes for weeks to come. As I find more stuff for the shelf, I'll update the blog.

Now that I have two sessions of a hexcrawl down, I thought I would share some tiny hacks and secret rolls happening.

The first is using The White Box by Atlas Games for tracking purposes. In my last post, I used meeples for character tokens, reserving the red ones for opponents. 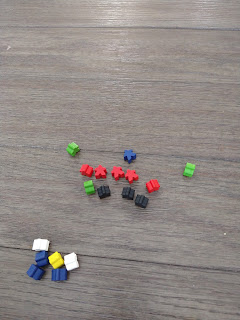 Meeples are little figure tokens. The White Box is loaded with all kinds of cool stuff for gaming. If $30 is too rich for you, try a search for used on Abebooks. The White Box by Jeremy Holcomb on Abebooks.com.
Using tokens for the party enables the players to see basic information without turning the Theater of the Mind into a game like Car Wars or something. The players were able to determine the approximate range and distance to targets and come up with plans for dealing with problems.
Normally, I would grab whatever tokens were on hand for the players: a chess set, a Risk game, dice, etc., but I had other ideas for the tools in The White Box.
Old School Essentials has a great item-based encumbrance system. You can download the rules and tracking sheets here. The quick gist of the rules is you can have 2 items in your hands plus 10 items in a pack and still move at 120'. Two more items drop you to 90" and so on. 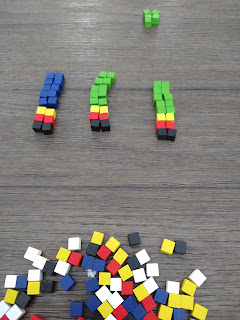 Since the majority of the stuff my players are carrying is not their personal property and also consumables like food, I had them use the small blocks from the set to figure it out. Green is the full 120" movement while yellow means 90", red is 60" and 30" is black. By doing this visually, the players were able to visualize picking items up from a pile of gear and load up their boots.
I also have a few environmental hacks to help me DM my first hexcrawl. Since the players are on the Island of Sardinia, I have simply googled the weather in Palau, Sardinia. Todd Leback's Into the Wild has some great rules for generating weather, but this is one less thing for me to track. I'm 99.99% certain that Mr. Leback didn't expect someone to use his book to hexcrawl a real-world place, so there is that.
The characters are also experiencing some other things not included in the session reports. Since they are on a grassy plain, their line of sight extends to the sea. Every time they enter a hex in a direction that faces the sea, I roll a 1d20. On a 1, they spot something in the water. 1 and 6 is their ship, 2 and 5 is a different ships and finally, 3 and 4 are one of those dreaded sea serpents. Additionally, once per hex, I allow the party to actively search for The Zypher. The only difference is they roll a 1d20 instead of me. Should this come up after I make my secret roll, I will override my roll with the party's die roll.
This puts some agency in their powers of observation and planning. Quite a few times, a ship has passed by but it wasn't their ship. They seem to appreciate that detail because they are not ready to give up their quests, but if they did, the real civilized world calls.
I cannot tell you how pleased I am with this collection of rules, from Todd Leback's Into the Wild to the hardcover of OSE's Rules Tome. This is my new favorite combo. Good thing too, because it looks like they'll have another kickstart campaign coming soon.
Posted by Phil Viverito at 2/09/2022 08:13:00 PM No comments: