Perfect Pairings, Episode One The Rain

In this post series, I will be selecting TV shows and movies that pair nicely with different rulesets. I won’t be picking big-budget, well-known series that probably have dedicated rulesets, like Star Wars, Firefly/Serenity, Farscape, or anything in the MCU.

I wanted to start off with an easy one, a TV show is adaptable to many sets of rules. 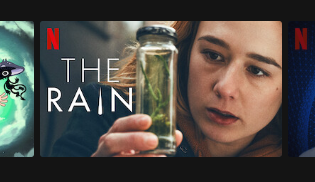 The Rain is an amazing Danish TV series running 3 seasons. It is available on Netflix and it’s a very quick binge. The Rain’s story is covered in just 20 episodes, which is great for gaming. Once establishing the scenario, the tight episode schedule allows for a great amount of deviation for role play.

The main characters are Rasmus and Simone Andersen, two children who live through an apocalyptic plague carried by the titular Rain by escaping into a secret bunker. Cut off from the world, they live in isolation for 6 years. They are forced out of the bunker by an alarm and are taken captive by Martin, Patrick, Lea, Beatrice, and creepy Jean. Simone turns the tables on the raiders by revealing that there is a network of bunkers full of food and supplies the gang desperately needs.

It soon becomes clear that the raiders are atypical survivors who avoid as much trouble as they can. They live by their wits and their ability to hide. It is rather anticlimactic when the plot reveals a dangerous organization called Apollon that hunts survivors for unknown purposes, making Martin and Patrick’s gang far less dangerous than they seemed in the prior episode. Even Jean who starts off creepy is far, far less threatening than one would imagine.

The technology stays about 5-minutes in the future, with the highest tech items being either drones or one-off 3d printed affairs with little purpose other than to build suspense. The vast majority of the technology revolves around detecting various things and horror-style virology experiments gone wrong.

The series is weapons-lite, where the primary purpose is either defense or mayhem. This is kind of understandable given the possibility that the sky could open up and kill everyone. Marin has a semi-automatic rifle, but no one else bothers to pick up a piece. The scenario puts the rule of 3 in full effect: water, shelter, and food, in that order. Many of the other survivors have weapons but not the skill to use them effectively nor the ability to maintain them. Apollon is a paramilitary group that uses Humvees, body armor, and automatic weapons but is not terribly inclined to use them. The story is more of a cat and mouse game than a post-apocalyptic shoot ‘em up.

In adapting this universe for gameplay, the referee or gamemaster will be crossing off more items than they add to pretty much any ruleset. That makes for quick set-up and low maintenance.

I did notice some odd items that were missing in this series. Of course, cell phones are a thing of the past given that electrical power is not generally available. The same goes for private vehicles due to the total societal collapse. Some characters have bows and arrows. I found it odd that almost no one has a knife, axe, or hatchet. Nothing could be more useful in a survival situation.

This universe would be perfect for a low-tech introduction to any version of Traveller. Personally, I enjoy the Cepheus Light edition but literally, any edition will do. The lack of gunplay will increase the character’s survival rate because guns in Traveller are rather… ah, final. Traveller’s skill collection and mechanics are perfect for this sort of cat and mouse thriller but would require some careful choices in character generation.

On the plus side, most of the characters in The Rain are under 30, so straight character generation might not be too off kilter. Simply replace certain items from the tables with more mundane goods. I would urge a referee to modify the tables in advance with goods and resources from the world of The Rain preloaded so players don’t feel cheated.

More than a few of Traveller’s skills are not made for a 5-minute in the future story but by performing the same preplanned swap for other skills is easy. Logistical and basic education skills are king in this sort of world. It is important to let the players know you aren’t taking things from them but substituting a skill that is more appropriate.

Another old ruleset that could work is Top Secret. That game has a good set of skills baked right at character generation. Going light on starting skills mirrors the feel of The Rain’s characters. Many of the main characters have no college education while a handful are “Super Asmodeus” types when it comes to knowledge. Depending on the player’s style and desired characters, you could make a “team level” pool of skill points where the party chooses who to dump points on. Top Secret isn’t set too far in the past, so it’s almost perfect for this TV show’s era. Again, the lack of weapons in the show will merely enhance character survival. 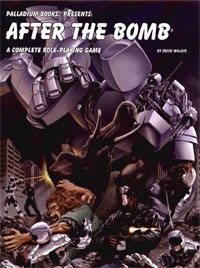 My last pick of rule sets is After the Bomb by Palladium. The reason I place it last is The Megaversal system is so well integrated, it is easier to expand the possibilities than reduce them. Megaversal is a great system but the referee would need to cull a ton of bits to fit with The Rain. While After the Bomb seems a little off-beat for a bunch of plain Jane humans, I have not revealed details of the TV show which make this a sensible choice.

The skill system is robust and sound. There is a total lack of MDC weapons used in The Rain but that doesn’t mean the heroes won’t encounter MDC tough items in the form of vehicles and bunkers and such. I like the hand-to-hand combat system for this sort of survival scenario. Lots of dodging and parrying and pushing, as opposed to city leveling MDC combat.

What I haven’t mentioned in some mysterious events and people in The Rain, so as to avoid spoilers. After the Bomb and Traveller have the best rules to support these things while to my knowledge, Top Secret has none. A savvy referee could probably adapt these issues away while using the strengths of the Top Secret to keep things together.

Now, you may wonder why I haven't suggested other rulesets. The reason for this is simple, three is reasonable AND this is a series where I'll make future pairings of movies and TV shows to game sets. Stay tuned, your favorite game may show up eventually.