Live Another Day Or Buy Mac A Drink (Computer Review)

I don't like to do computer reviews on TheseOldGames.com as I already have a website for computers, software, and hardware called unpwnd.com just for that purpose. However, since this is a website for Old Games, sometimes a post about computers comes naturally.

And this is one of those rare computer-themed posts. To support These Old Games, I maintain a Blueberry Mac iBook released back on July 21st, 1999. This thing is 22 years old and still ticking despite some serious carnage done to it. Here are the specs as they stand today: 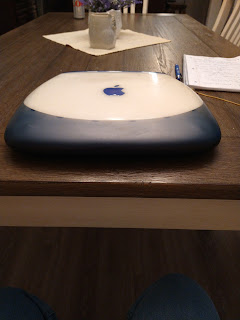 I suppose the first question I should answer is, what is the boot time on 20+-year-old computer? About 2 minutes with all of the control panels and extensions turned on. See for yourself by watching the video below.

With everything turned off, it boots much faster but I virtually never do that. 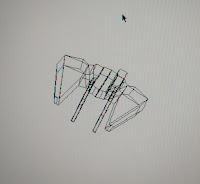 So, what do I use this thing for? Gaming, writing, drawing, and CAD. A lot of what you see here and on my other websites is written on this machine. I also listen to music, podcasts, and audiobooks.

By way of example, I wrote all of my Traveller posts using this computer, which included some wireframe designs. My first ideations for the Devil Fish freighter started on the Mac and were transferred to another, more modern machine for improvements. All of the writing was done in Word and the basic outline for the ship was done in RayDream Designer 3.

Long before I used this machine for my websites, I was using a machine very much like it to create whole books. My father's games, like Knight Hack were written on a 512K Mac and then converted several times until they reached their modern form. 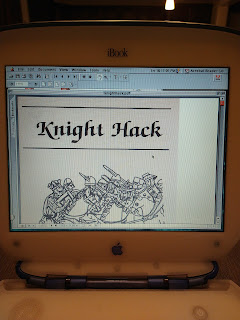 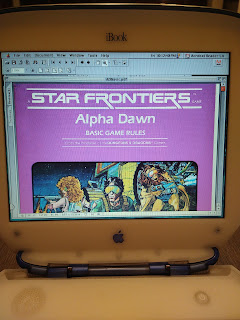 The interesting thing is, when combined with a Linux computer and some PDF software, I can bring my whole DriveThruRPG library with me on the Mac. Yes, that's right. Your modern works can be opened (usually) on a 22-year-old computer. Sometimes it balks, but most of the time it just works.

Surprisingly, I often don't need to tweak anything in the PDFs for Adobe 3, 4 or 5. I am running a lot of older Adobe software, so if I do encounter a glitch I can usually tweak it via the Mac itself. There are some rare cases where nothing can be done to "fix" or "convert" a file to something the Mac can read. I just deal with it.

I will grant you that images are not so smooth on the iBook due to the 800x600 display. They look like they're printed on canvas. Nothing can be done to fix it, but usually, it isn't a problem worth mentioning.

So, what can't I do with this 22-year-old machine? I can't print. Using the internet is problematic. There is software that will get me on the web, but it doesn't handle .CSS well. Believe it or not, this machine shows up as a Nokia cellphone in Google Analytics due to the handling of the emulation of the browser.

This particular iBook has an Airport card. Theoretically, I could connect wirelessly to the internet but I would have to use an old router. As in a router old enough to have security issues, so I don't do it. Part of the process of using this machine is it forces me to create backups. While I am not an insane security nut, I do love my backups. These occur naturally by moving files to my 32 GB USB drive or the 128 GB external drive.

Ironically, I had been creating DVD backups as a part of this process but they did not survive the house fire which did not consume my Mac, the USB drive, or the external drive despite being dowsed with fire, water, and presumably a massive power surge as the fuse box and wiring burst into flames and failed. The DVDs incinerated, right next to the hardware that didn't. How does that happen?

To be honest, using the internet on this machine is a poor experience so I try to avoid it. I do have a local copy of Wikipedia on the 128 GB hard drive. I can access it with Netscape Navigator which is totally crazy to see in 2021. My copy of Wikipedia is wildly out of date as it hasn't been updated in years, but it works well enough for basic research. I sometimes connect for games, which seems to be less problematic as they are old enough to not break.

In my next post for unpwnd.com, which will be written on this Mac, is about loading Linux via Crouton to a Chromebook. 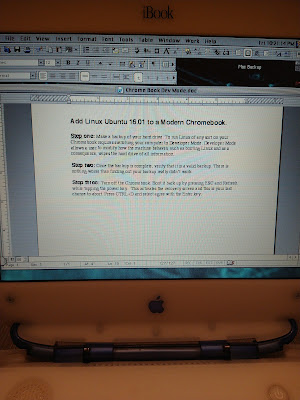 The great thing about writing on this machine is the intimacy. I don't have updates running, firewalls popping, no Facebook or Mewe starving for my attention. It's just me and the words, not the world. It's really nice to "unplug" without actually unplugging. My first cause for getting into computing decades ago was for problem-solving, speed, and automation. The superiority of a computer over a word processor or typewriter is amazing. The ability to make digital art is complementary to physical production and allows for techniques and ideas that can't be done on paper alone. Add in that an electronic product can be created for sharing or printing is really great.
To me, this production is what computing is all about and this iBook still produces.
Posted by Phil Viverito at 11/05/2021 11:55:00 PM