Hexes - The Greatest Gift to Gamers

Hexes are great. For gamers, they might be the best tool for maps and other measurements.
Many of the relationships that can be created with hexagons occur because of a simple formula: Side Length = Perimeter over Number of Sides. If you have two of those numbers, you know the third. From there you can find the apothem, the distance from the center to a corner, and the radius.
This is true for more than just hexagons, but hexes are nicer looking and more useful than triangles and squares which are the only other two shapes that tesselate*.

*See comments section below. Many shapes tesselate: they are called regular, semi or demi tesselation. 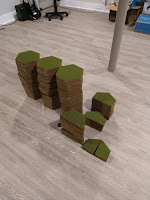 Anyway, I want to show you a gift I received from my father. I believe that it was gifted to him at some point back in the 80s or 90s.
It's a set of styrofoam hexes. There are 72 full hexes, 14 flat half hexes, 6 pointy half hexes, 10 two-thirds hexes, and 4 quarter hexes. Each full hex is 8 inches flat to flat side and each flat is 4 5/8ths inches. Every part is 3/4 inch thick.
In addition to these regular shapes, there are dozens of smaller scallop slope-edged pieces that are used to make terrain, like ridges and hills. You could make a hill multiple steps high. By laying down blue cloth or paper, rivers spring to life. 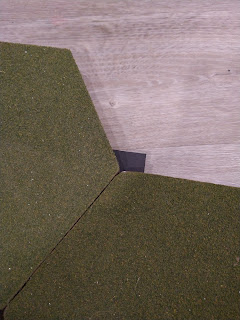 Each piece has a biscuit cut at each corner, for a cardboard biscuit that holds every piece together. I have a zillion of those. I would imagine that any map could be reproduced by this one set.
Now would you like to hear the crazy part?
They're obviously handmade. Every edge is hand-painted brown and the playing surface is faced with railroad-style grass. Every edge is perfectly straight, every corner exactly 60 degrees, every biscuit cut is exactly the same. There is not a bit of waver or imperfection in any of the 100s of pieces.
Mindblowing!
Have you ever tried to draw a hex? It's not easy. I know, I created a set of paper hex templates for mapping. Even on a computer, the process can drive you mad until everything just clicks. I cannot imagine a scenario where foam cutting hexes just "clicks". Every cut is perfect. I can't believe the effort that went into this.
At this point, I don't know what to say. I'll just share some pictures. 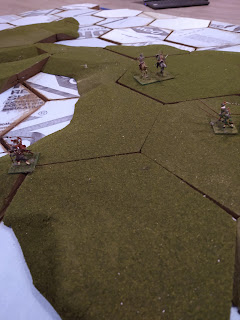 A few notes on this series of images. At the start of this post, I knew I wanted to have a map of the UK. After 90 minutes of crawling around on the floor, my desire gave way to the fact that I am out of shape so Great Britain is misshapen and lacks terrain. It could be done, but not in the time given.
Like the map, I had a list of things to photograph like Battlemechs, tanks, D&D figures, X-wings, etc. After taking a few images, I realized that I would have to spend another session of crawling around on the floor to clean up. My drive gave out at the English Civil War models. Maybe another time.
Posted by Phil Viverito at 11/09/2021 08:57:00 PM