If I've said it once, I've said it 100 times. The 1981 Basic Edition of D&D is my edition of Dungeons and Dragons. Before that, I had the 1979 AD&D books which seemed a little opaque to 7 and 8 year old me. But by 9, I could grasp all of the ins and outs of the Moldvay set.
At 49, I set a challenge of reviewing 52 gaming culture significant titles. I've done novels, movies, game modules, supplements but only a handful of rule sets. The reason is pretty clear, how does one review old or new products which emulate old games? Everyone should know everything about them already.
A month or so ago, a reader whom I shall call Blackrazor gave me dozens of books to replace the ones I lost. Additionally, he threw in a bunch of things I have never seen. By way of thanks to my readers, I want to review them.
This loops me back to my original observation that everyone who plays these games should know them. So true.
Back in February of this year, I reviewed The White Box by Atlas Games. This product isn't a game, it's a developer's tool to create games. In that review, I mentioned that the vast majority of essays written for this title explore the pedagogy of games. Pedagogy is the method and practice of teaching.
This nicely brings me around to this little piece of artwork: 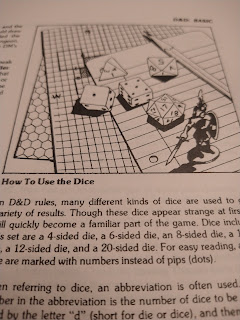 The Moldvay version of D&D was meant to teach from the book, as opposed to the methods used in the prior editions. It's a fine distinction, in intent, scope, and for my purposes, a perfect distinction.
OD&D, Holmes, and AD&D e1 are very fine games, but they were not designed and developed as the Moldvay books were which is very evident in terms of play and players. These three sets were designed with the intention that one person would own the books and that one person would teach the rules. Moldvay on the other hand, explains the rules with an almost boardgame approach so that players pick a role and act on it rather than the exploration of roles (and rules) that older editions supposed.
It's the method of teaching that changes between editions. Players were always cautioned against reading the DM's material. But in a generic sense, meaning they shouldn't metagame. Knowing the rules was always encouraged, but defining which rules were in play was the purview of the DM. So, when players hit those OD&D-type games, they often knew how to run a game even when in action as a player character, but they learned directly from the person hosting the game. In B/X the rules themselves teach.
Going forward, I hope to review several B/X sets from the point of view of how the rules convey the pedagogy of the game.
I have 10 more entries for my 2021 review series, if I could make whole rulesets half of those, I think I will have succeeded in this adventure.
Posted by Phil Viverito at 10/06/2021 10:26:00 PM

Email ThisBlogThis!Share to TwitterShare to FacebookShare to Pinterest
Labels: B/X, How To, IRL, Review