As of now, the blog and all future products all comes down to priorities.

44 days ago, our house was devastated by a fire. My family made it out, as did 2 of 4 pets. My wife was found in the front hall attempting to rescue the animals. She was scorched, but is doing fine. As are the kids and Tori dog and Shinubo the cat.

Starting on July 19th, 8 pm, incredible support started pouring in to me and my family. I was at work at the time the fire began and raced home. On arrival, I found 7 fire departments fighting the blaze. Moments before I got there, they had retreated from the house as the temperature soared over the 1000 degree limits of their equipment. What I didn't know until weeks later, other fire departments had activated and were covering all of the areas those 7 departments normally cover. To say this was a massive response would be an understatement.

The fire was limited to the basement, but where it burned didn't matter. The temperature was rising throughout the home. If the roof caught fire, there could have been an explosion that would ignited the neighbors houses. To prevent this from happening, fire fighters cut holes in the roof to allow the heat and pressure to escape. This would cause the roof to collapse in and the whole house would be lost to save the surrounding homes. Since the heat far exceeded their equipment's ratings, this was the only safe option.

That isn't what happened.

Instead the fire fighters mounted a rally and reentered the blaze to fight the flames directly. It was all hands on deck moment. They first used sheets of water to cool the 1000+ degree heat on the upper floor, so they could advance deeper into the blaze. In the middle of the assault, the chaplain lead a group of men and women to rescue our cat, Benny. Although Benny had already succumbed to heat and smoke, they retrieved his body for proper burial, over which the Chaplain presided. 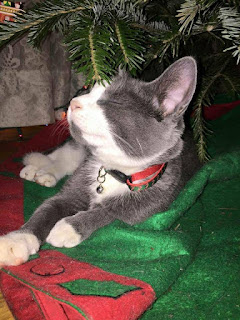 Inside, the battle against the fire continued. They marched from the front of the house to the back under a continuous blast of water to beat the heat back, to where the blaze raged in the basement. Just to convey how dangerous this was, the metal refrigerator spontaneously combusted from the heat of the smoke. In the back bedrooms, the plaster wall disintegrated from 5 feet up to ceiling level.
It was a race against time. If the plasterboard ceilings gave and the roof timbers caught fire, that explosion I mention would have claimed the lives of 7 different department's fire fighters.
Those men and women won the race, saving the roof and the exterior walls. Everything else was gone, but at least the home is weather tight. Which will allow us to rebuild.
Gone doesn't really cover it. Our furnace melted. The fridge is a lump of metal. The stovetop and oven as near as I can tell, imploded. All of the copper wiring and pipes burned. The iron pipes for the gas shattered. The walls of the bedrooms and bathroom are non-existent from shoulder level up.
But this isn't "the end" or even "an end".
Before we left our burned out home that night, our neighbors gave my wife and daughter shoes and clothes as they were wearing pajamas when the fire broke out. Our in-laws gave us a place to sleep that night. The next day, an endless stream of visitors came to see us, each bearing gifts as they though needed. And this continued for weeks.
I think it's all over. Except for saying, "thank you".
Priorities and all of that.
I would like to thank "Blackrazor", a local reader who provided us with dozens of game books. I would like to thank 716 Pulp and Dragon Snack Games for their wonderful hospitality of their establishments. I would also like to thank all of my readers and associates that reached out to me, like Todd Leback, The DiBaggio Family and many, many others.
Thank you. I really couldn't do anything else until I said, "thank you".
In the coming days, I have a ridiculous amount of work to do, but at some point will start posting regularly, with non-fire related posts.
I am probably not ready to stop saying "thank you", but having said it, I can do other things.
It's a process and a long one, but thanks to all of you, I am ready to begin.
Posted by Phil Viverito at 9/01/2021 12:40:00 PM

Email ThisBlogThis!Share to TwitterShare to FacebookShare to Pinterest
Labels: IRL