Party of 6 for the Castle

Over a week ago, I described a series of characters in less than two pages. They have histories and places in the sandbox. Well, it's not really a sandbox because I intend to shove these characters through a classic module before I let them run in the sandbox.
I gotta a couple of reasons for this. First, I want to make sure I have the right rulesets. Second, characters with no adventures are no fun. Third, I plan on reading through Into the Wild and using the survivors from this module run to learn how to hexcrawl.
Here is the recap: a young mage named Charles should be on his way to the big city to learn magic. He has his two friends Alice and Avfin (Elf and Cleric) in tow and watching over them are 3 higher-level characters, Wralin the Dwarf, Nicholas the Cleric plus their bodyguard Gaelin. 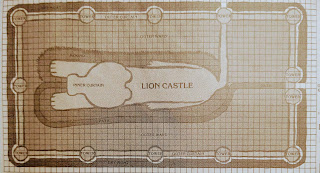 They are hopping from town to town as they make their way to the big unnamed city, which is a good reason not to use Into the Wild. It's known territory. But here comes the hook to the classic module. At an inn, young Charles hears the story of Sargon and his haunted Lion Castle.
Nicholas and Wralin, like responsible adults they are, put the kibosh on this irrational side quest. Charles objects by truthful stating that Nicholas promised to keep an eye on Charles and his friends on this adventure. No one said which adventure this was. This charms Wralin, who loves this sort of thing. Nicholas soon realizes that Lion Castle could present an opportunity for not only youthful adventures but uncover rare relics and artifacts.
The deal is, Nicholas and Wralin will stay at a base camp near the outer wall, while Avfin, Charles, Alice, and Gaelin the bodyguard enter the castle. Should the party get into trouble, the Dwarf and Cleric will hear their screams and come running.
Right... 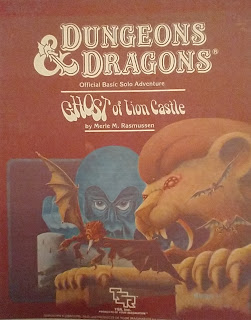 So there is your hook. I've used Ghost of Lion Castle as a regular module for group play with a couple of adaptions.
The adaptions come from actual solo gameplay. The monsters are all well designed for what they are supposed to do, push the player around without killing the conservative and well-fed. Aggressive characters will be eaten. The limits are food and torches. The killers are the traps.
Knowing those facts, you can provision a whole party of actual player characters appropriately.
The first thing to handle is how to deal with the traps. They do more than enough damage to wipe out a single character, on average. In solo play, each one comes down to luck or cheating. A party has a great chance of getting through simply because they have more hit points.
If a trap is labeled as "one x", one arrow, one stone, etc. then use a table. Write down each character's name and label them one to whatever. If you have 4 characters like I do, then you roll a 1d4 to see which one is subject to the trap. If you have 3 characters, then use the same 1d4. There is a 1 in four chance that it misses all of them. The same goes for 5, 7, 9, etc. Merely adjust what type of die is used to be equal to or larger than the number of characters in the party.
Some traps are clearly meant to be area of effect traps. This is going to hit the whole party, no die roll needed. Simply play through as written in the BSolo.
The most unpleasing type of trap in BSolo is the portcullis traps that drop on people. They have a saving throw roll to avoid them, which for solo play makes perfect sense. With a party, this saving throw is an awkward mechanic. What exactly is happening? Is the gate chomping up and down until the whole party passes through? No.
The way to play this type of trap is to have the party move through in a specific order. As the save is made as each player passes under the trap. As soon as one player fails his or her save, the party as a whole must declare "forward" or "back". Once this declaration is made, you know what rolls to make.
If the party goes forward, the player that failed their roll is hit. Everyone behind him is forced to make a save or also take damage. Everyone ends up on the same side of the portcullis. If the party retreats, the person who failed the save takes damage and everyone who has already passed the portcullis is forced to make a second save to leap backward before the gate slams closed, possibly taking damage.
With an actual DM, you can have a lot more creativity in addressing this one trap. But in cases where there is no judge, this simplistic scenario works best.
I have one other modification. In places where traps occur, there is a 1 in 20 chance of finding a body, the body of one of the pre-generated characters. The weakest traps do 1d4 while stronger traps do more. Basically, they do 2.5, 3.5 hp, or worse. Even though the pre-generated characters have more hit points than average, it's tough to survive some of those traps.
Just like the dropping portcullis trap, make a list. Roll a die equal to higher than the number of characters available. This mod is done for expedience's sake. The party can acquire the gear they need, torches and food, as they go. The other gear is good, but not really necessary to progress as food and torches are. 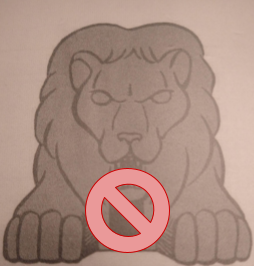 So where is the party now? Nicholas and Wralin are camped out about 100 feet from the outer gatehouse with the horses. The horses don't really have a part in this adventure, except to express utter defeat. If the Dwarf and Cleric have to run into save the youngins, then the animals will wander off except for Wralin's mule.
Having given the outer gatehouse the once over, no expects for it to be trapped. Alice is hit by an arrow. The kiddos do nothing to alert their backup of the trouble and proceed to the front gate. Things go wrong here. They are rough 300 feet away from their backup, who does hear something but doesn't hear screams for help or sounds of combat. They ignore the crashes and bangs, figuring the younglings are looting.
In reality, the party has explored 8 areas and encountered 1 arrow trap before having a lot of trouble. They make it to the paws of the castle before the traps come on fast and furious. Arrows, molten metal, and several crashing gates doors beat them to with an inch of their lives. They decide to stop and rest in the stables, the first room inside the castle proper.
At the moment, Alice and Charles are down to 2 and 1 hp respectively and Gaelin is down to 4. Somehow, Avfin escaped all damage. As a first-level cleric, he is pretty useless for healing. But during this horrible beating, they manage to find two bodies.
They found the final resting places of Cortayo and Leesmith, which provides them with some much-needed supplies. They now have a +1 sword, +1 dagger, two potions of gaseous form, two points of healing potions, a +1 ring of protection, and a ring of invisibility. They also have a lot of mundane stuff.
I decided to call a break here as they rest up. They will not encounter a wandering monster this evening.
As a nod to how deadly this journey is, I decided to modify the healing potion rules. They contain two doses that restore 1d4 hp, instead of the module's 1d6+1. The issue is with normal first-level characters, they need less healing more often. One to 4 hp is more than enough.
If I were DM'ing this rather than soloing the module, I would have replaced some traps with combat. Real players would not find this session amusing. It would probably piss them off. Even if they had a thief in the group, there are no real mechanics to avoid a magic missile to the face.
Posted by Phil Viverito at 9/18/2021 11:47:00 PM