It's been about 18 days since the fire. Today, I want to start taking a look forward. The inventory of the house is complete. Let me show you a shelfie: 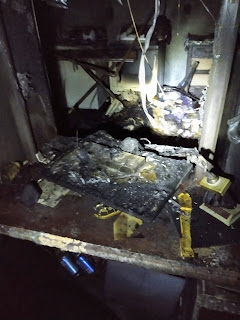 Yeah. I can't dwell on that.
Much to my amazement, this survived: 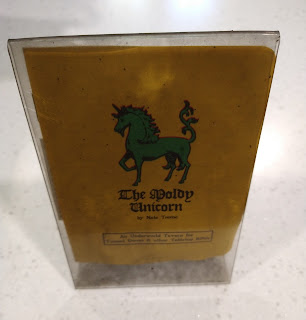 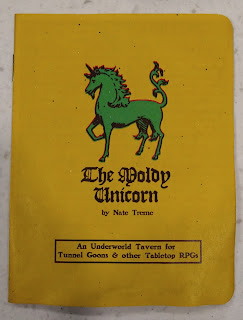 Thanks to the Plexiglas frame it's only a little toasted. This is one of those products that reminds me so much of my youth and when I really took a liking to gaming. It still brings back the smell of the mall and Waldens Books. The Moldy Unicorn is great. I love this little book so much. It has a great cover, an interesting adventure and of course, an inn called The Moldy Unicorn.
I had an interesting childhood. My dad was a big wargamer and would take me to conventions. I was a teenager before I realized that not everyone's dad played games or went to conventions. Or had a suit of chainmail or build castles to teach history.
I don't think I had a moment where I thought playing games was odd or unusual. Or that this game was better than that game. My dad played WRG while I preferred D&D. Our middle ground was Chainmail, especially that little mini-game for jousting. He loved that as much as I did. Plus, he had the figures for it, which was totally extraneous but hella fun.
So looking forward instead of backwards, I am going to take the time to really explore new things. This will be a new beginning.
Posted by Phil Viverito at 8/06/2021 06:21:00 PM