Lighter Reading - What I Do on Wednesdays

I'm reading for my next couple of reviews. I like to print stuff out for reading. Today, I fired off The Lake of Abominations -- Hex 17.23 by Third Kingdom Games (Todd Leback) to the printer. Since I have Mr. Leback's Into the Wild coming in the mail, I was going to use this as a model for a hexcrawling module.

Yeah... I don't know about a hexcrawl module, either.

Anyway, this funny thing keeps happening. My printer insists that blue is a grey scale color. 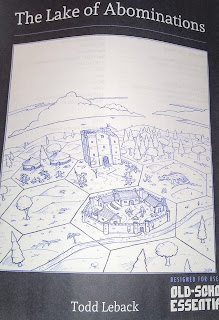 I should have printed in color, because the whole thing is packed with color maps. But in grey scale, my printer keeps coloring the black lines of the art in blue. I couldn't do that if I tried. I actually like it a lot.
Wacky technology. 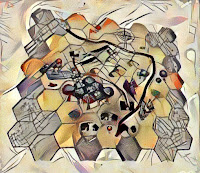 Anyway, back to the module idea. I'd like to revamp both my Kobold's Folly and Compass Rose Inn mini-setting maps into full blown modules. It will probably take months.

I also have a third idea for a map of Miledown, another setting placed in the middle of my Peninsula of Plenty map. Miledown is a small town in a valley. I already have the cover art ready to go. It's just a matter of writing... you know... a description, a story and an adventure.

Little things.
Of course, since I am going to need maps, I am updating the Peninsula map to a standard 6-mile hex map. When I started out, I was just blue skying and didn't have the scales right. This will fix that. I have an area 150 hexes by 60 hexes planned. About the size of Italy, which the campaign is based on.

One upside to this is I now have a name for the Human Capital: "Rhoom". I wanted run with a counter-factual idea that Remus instead of Romulus survived the foundation of the city.

Guess what? That doesn't work because Rome was named before Remus and Romulus and "Romulus" means "a man of Rome". Crazy ancient mythology.
I decided to just steal from Shakespeare:

That her wide walls encompassed but one man?
Now is it Rome indeed, and room enough,
In Shakespeare's time, "room" and "Rome" were pronounced differently and rhymed, making the pun complete. So with a little poetic license the capital is now called "Rhoom".

I started with the Lake Potamus area and moved out from there. This lake is squeezed between forests, mountains and savanna lands. It's named for the Hippos that live in the region.

This detail allows me to have chains of forts and fortified houses on the plains. They are fortified against the wildlife and not actual invaders. It's kind of handy because it keeps the Rhoom Empire and Elven Dwarven Combine in a cold war in the area. It's hard to travel the savanna without encountering beasts.
This is the valley of Miledown.

It's less thought out right now, but coming along nicely. Since it is a hidden vale, they don't have many visitors. It doesn't look unusual to visitors but it does have several mysteries.
Posted by Phil Viverito at 5/05/2021 04:21:00 PM 4 comments: