Party of 6 for the Castle - Experience 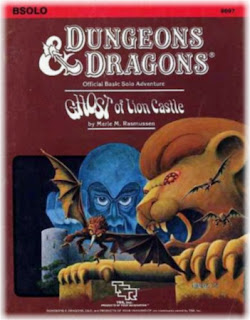 In my last post, I ran a series of characters through the Ghost of Lion Castle using the Basic and Expert D&D and Rules Cyclopedia sets. This was a solo run so I totally determined the outcome of adventure. The party crossed a half dozen challenges in the form of traps. Ultimately, they found the main entrance and two dead bodies loaded with loot.

This is a case of character backgrounds and details meshing with the shared campaign world.

What did not come to pass was the distribution of treasure and experience. I skipped the first due to lack of time, that will be the first thing I do in the next session. Experience is a tougher judgement call. Under B/X and Rules Cyclopedia, experience is awarded in a 1:1 ratio to gold plus whatever experience a monster would provide.

In the last session, the characters encountered only traps and treasure, some of it magical. I can easily map out found items to coin value excepting magic items and weapons. They don't have clear price in these rules. It seems the intent was to have the object be the reward. I'm of two minds on that as it makes perfect sense. But there is the kid of the 70's who used to make wish lists from the Brand Names Catalog that wants everything to have a value.

What I came up with was a value of about 250 experience points divided among four characters. (Two characters are sitting at a base camp.)

This has happened because I should read the rules of this module strictly for solo play. The party has no thief and even if they did. the traps they encountered are not the sort a thief can disarm. No experience for them.

If I had a "live" party, I could see many opportunities for the party to gain experience off of the traps. The traps in this section of the module was the very reason I selected the front door as the party's destination. In solo play with a single character, any of these traps could be deadly. The traps the party encountered would be unpassable to a single magic user with max hit points. However, 4 characters can eat up that damage. I did it because I've always wanted to do it in solo play but couldn't with an individual character.

The traps are a series of obstacles, two magic missile attacks, a molten metal trap, two sets of murder holes and several slamming doors and dropping portcullis's (portculli?) to force the characters forward.

As described, the magic missile attacks and slamming doors are unavoidable, the molten metal trap plus the dropping portcullis's both requires a save, and the murder hole attack requires judgement.

Were I DM'ing this with real characters, the potential to judge situations allows for experience awards for these traps. For the doors, murder holes and portcullis traps, the simply decision to act as one and move forward or back allows for roleplay. Tricky PC's could fill sacks with dirt to prop the doors or prevent the portcullis from closing. The magic missile and murder holes are interesting traps for the PC's because there is that small chance of evading them through trickery but then wandering back into them by poor choices.

Ah, let me tell you about parties and poor choices...

But all of that implies thinking through an immediate problem and receiving experience for it.

This Friday, I am looking forward to reading some materials I received plus another session in Lion Castle.