Wilhelm Albrecht Oeltzen was German astronomer and author of several books. He is known for the processing of a part of Friedrich Wilhelm August Argelander's Zones from 1849-1852 in Bonn Germany. Often these are labeled "A. Oe." or "AOe" in catalogs. This was a two step process, I am uncertain if the abbreviations differentiate the two projects. In 1875, he disappeared. I have been unable to find any reference to what he was doing at that time.

Since the 1870s are an interesting time period, it would be no surprise that the man simply passed away of natural causes, far from home.

Today’s post is for Throw Back Thursday. I decided to take a listen to AstronomyCast’s first episode. After the first few minutes, Pamela and Fraser catch their groove. It is surprising how fast they found “the formula” and established the sound and style of the show. 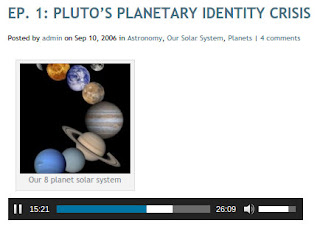 Timely, as New Horizons approaches Pluto. It is a long way off, at least the way I drive, but surface details are becoming obvious.
Posted by Phil Viverito at 5/21/2015 01:08:00 PM No comments: