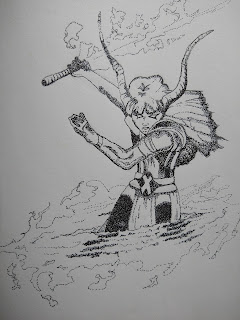 The film does a variable job at depicting the character's powers on a budget. The effects were on-par with Ready Player One which is not a complement. Ready Player One was a massive mashup of decades worth of video game art which works in that film. It isn't great for other film types like The New Mutants.

The final character, Illyana has something else going on. She's a mass murderer and can teleport. Why is she still here, if not to kill everyone else in the film? And she definitely hates everyone, in a nasty, condescending, racist way.

My favorite bit was everytime Sam used his powers. He displays these brilliant blue/orange shimmery flames like charcoal on the grill which is an amazing play on his character. Sam comes from a mining family, so the reflection of coal in his powers is pure awesome.

Magik was shown trying to knock the Demon Bear into Limbo. It made perfect sense since she couldn't win in straight combat, but this tactic was negated by the strange video game special effects. It was kind of hard to tell that was her intent rather than random flashy scenery. The Demon Bear was awesome and terrifying, but the viewer shouldn't be rooting for the villain.

All and all, I give it one and half stars of five. (EDIT -- On rewatching, I've decided that Rahne and Sam merit a star on their own, so two-ish stars) Maybe you should read my 5 star review of Dungeons and Dragons (2000) to evaluate how not good this was.