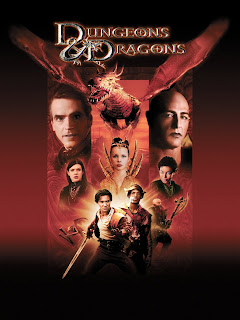 We have a film starring Justin Whalin, Marlon Wayans, Thora Birch, Zoe McLellan, Kristen Wilson, Lee Arenberg, Bruce Payne and the Original GQ Smoothy Jeremy Irons. They tried to work with all kinds of Intellectual Properties from the game and it's a dud.

Well. That has to be some sort of record. How could you fail with that much background information and those actors? Easily, apparently.

But why would I give it 5 stars?

It's funny really. It's like someone at New Line Cinema sat down at a table and said, "Gee, let's throw some money at a long list of actors who probably aren't filming something today and we'll see what happens. We can fix a lot of stuff with edits and in post." Looking at the list of people involved with this project, they could have picked worse people. Hell, some of them I like a lot. Actors, directors, writers and so on. When it comes to the actors, I am sure they went out of their way trying to make an excellent movie and I am positive it was perfect.

What they missed was a quality Dungeon Master. You know, someone who could come up with an engrossing story and snappy delivery. Something that makes the players want to come back for more.

If only that they hired an actual DM to actually, you know, produce something. Instead, what we got was Justin Whalin, Marlon Wayans, Thora Birch, Zoe McLellan, Kristen Wilson, Lee Arenberg, Bruce Payne and Jeremy Irons all in a room, picking their character sheets and paychecks off the commissary table and trying to work out their motivation in all of this over some dicey ham salad sandwiches.

The result is laughly bad. How could they pick out 8 people with actual 18+ charisma scores and botch a movie?

Well... they didn't. The result is exactly like if you sat down with Justin, Marlon, Thora and the gang and tried to play D&D for the first time. I can't tell you how many horrible campaigns I've put stellar players through and this movie captures this process perfectly. This film is a perfect rendition of every noob mistake made by a rookie DM.

"I know Mr. Irons. You ARE charismatic. You just rolled a one, that's all. It happens..."