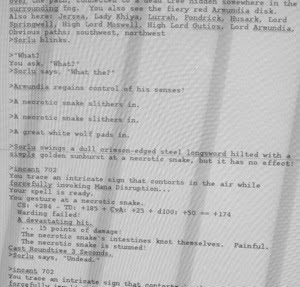 Last night, I was cleaning up some old logs and found my first adventure into The Marsh Keep Area.

We were attacked by Necrotic Snakes in the Ghastly Swamps. That doesn’t happen any more, the swamp is just outside of their range now. I am proud to say I am the first Rester to kill a Necrotic Snake. I was also the first to injury a Chimera, which ran for it’s life.
A few minutes later, I got lost and ended up in a running battle with a Tomb Troll Necromancer, a couple of Flesh Golems and a few Tomb Trolls. Fortunately, the group came back for me and handily defeated the Trolls in a truly epic rescue.
Jersea took up the lead as a bard and lore sang many new finds. She pulled knowledge and details unimaginable to us. 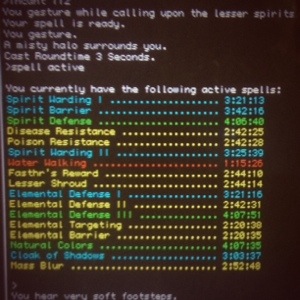 Moving deeper into The Keep, we found the Flooded Chamber. The pool with turned out to be an impassable barrier to me. I wished the others well and took up the rear guard position. Armed with a flask, some pretty old songs and my staff I managed to hold the Chamber against hordes of Trolls. I was focused on holding on, I missed the signal. The rest of the party escaped back to town.
My fault, entirely. I went down fighting an uncountable host of Trolls. The rest of the gang escaped back to town.
For the record, I heard that the prize was a book.