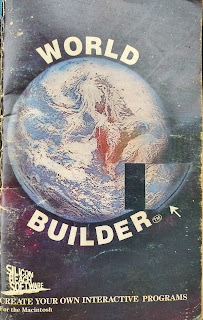 Title: World Builder
Publisher: Silicon Beach Software
Author: W. B. Appleton and Charlie Jackson
Year: 1986
Pages: 87 pages
Overall Rating: 4.5 of 5 stars
Ok, now I'm reviewing software. It's ok, we'll get through it.
World Builder is a 35 year old program for creating games. It was issued on a single floppy disk, with a manual for Macintosh computers by Silicon Beach Software. It was useable on System 3 and higher, but a System 7 or 9 needed a free update to 32 bit. Prior to it's release the code had been used to create the game Enchanted Scepters.
The package promises to get you coding to create you own games. Did it deliver? Hell, yes. It wouldn't build Doom or any other real time first person shoot, but it could certainly handle round based games. It was really meant to create IF games like Zork or other Infocom style games and did so very well.
The manual is a gem without the software as it is applicable to many of the core ideas behind programing. The manual suggests 4 steps to creation, design, populate, design characters and play. It's a little more complicated than that, but that complexity are just details of creation.
The software has a couple of windows and concepts the user needs to master and that framework of 4 steps makes it easy.
First, every world must contain scenes. Think of them as a stage for the story. Scenes are hardcoded with some basic concepts like a name,  travel functions, a drawn image, text to display and of course code. You draw static items that appear in the scene like walls, floor, lights, etc. These can provide hints as to what the player should do there. Next, you describe the scene with text. A graphical interface allows the builder to assign valid direction to move and text to appear when an invalid  choice is made.
Scenes can be connected like a map, or disconnected like a schematic. You need both most of the time. One great feature is the Scene Code which is specific to each scene. This can be used to create functional interactions, such as sit, stand, or turn on the lights. There is a customizable menu so the Builder can give the players hints or ideas of what needs to be done in a specific room.
Let jump ahead to designing characters. Every game requires a Player, so this is the one character you need to build. The code refers to the main character as Player@. He or she has attributes that any gamer would relate to, Physical or Spiritual Strength, Hit Points or health, etc. All characters have this abilities. A graphical interface walks the build through the creation process including such things as automatic responses to specific events like combat or other actions. It is fairly robust. Statistics carry through scenes and can be modified by them.
For example, a character could be give a great fighting skill in the character builder, but have those abilities modified by events or circumstances in the scene such as deep water or darkness. It's a very powerful engine.
Having mentioned that all characters have the same stats, World Builder does not have the best combat system. The problem is the random number generator. It's a random value between 1 and 256. That is so unlike a percent or a die roll it is hard to predict what the outcome will be without some fine tuning.
While this may seem odd or difficult, populating the world will clarify this. Being called "Populating", you'd think this part would be about characters. It is and it is not.
Games come down to a practical point of what is the conflict and what are the barriers. A conflict is something general: a battle of disimular viewpoints. That makes a conflict and the resolution comes when one of those viewpoints is allowed to extend to it's logical conclusion. It could be a defeat or a victory or perhaps even a merger. Conflict is complicated.
A barrier is something that must be overcome by a set of conditions. It less complicated than the conflict itself.
Was Smaug there for Bilbo to wrestle to the ground and defeat? Nope.Not that sort of conflict. But Smaug is defeated.  So technically, Smaug is a barrier. The defeat of Smaug requires a certain set of conditions, such as the bird pointing out the chink in his underbelly, Bilbo frustrating the dragon and Bard lying in wait for Smaug with a special arrow.
So, Bilbo is a character. But Bard, the bird and Smaug and even the arrow are not characters. They are Objects@ (in World Builder terms) or tools to gain a resolution.

World Builder teaches that difference in the course of programing your own adventure. Populating means creating Objects@ and Characters@ and integrating them with game world you creating. That's a powerful idea that transcends the software itself and is relatable to other outlets like gaming.
Pulling the tangent back from those high concept, this software is excellent at it's given purpose: World Building. It contains everything you need to get started, the code engine, the drawing software, import tools, sounds and sound creation, plus a means to distribute your product as a stand alone application.

It really is quiet amazing.
If you have the hardware, you can download it for free from various abandonware websites. It should be noted that this is not your typical abandonware because at the time that it was remastered for 32 bit and color, it was also released as a free download. It's only a quirk of time that prevents the author from hosting the software themselves as they had in the past.
If you don't have the hardware, the 87 page manual is an excellent primer into code and game design. Give it a look.
Posted by Phil Viverito at 1/24/2021 12:58:00 PM No comments:

Worldobuilder By Inkwell Ideas for Maps

A few months ago, I picked up a whole suite of software for mapping and world building. I have to tell you, the Worldographer software is excellent. I use it for my books, my blogs and my campaign. It couldn't be more handy. They have a collection of software, but my favorite is Worldographer. It basically does everything I wish it to.

You can pick up new icon packs from Patreon, as monthly subscription. My campaign is Roman themed, so I haven't partaken in that yet. I did purchased the e1 Icon pack when I bough the software. It allows me to make maps that look a bit like the Greyhawk campaign map. I love it.

You can give it a try with very few limitations from the store section of their main site. The free version doesn't nag or limit you too much. It is mean to just give you a taste. 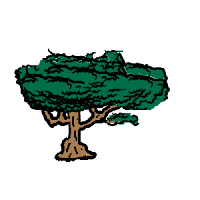 I can't help but tinker. My setting is a peninsula with a vast savanna, I needed acacia trees. The set of icons I had didn't have any, so I modified a regular tree into one using the GNU Image Manipulation Program.

It reminded me of modding Civilization Icons. You need a transparent background. Did you ever try that? I used to have great fun adding dinosaurs and Veritechs to the game.

Anyway, back to my campaign. I have a large Romanesque city. Romans lived in villas and apartments. The software had a half dozen choices, but I need to populate a massive area. Repetition stands out like a sore thumb, so I got modding.

In the first version of my city, the buildings looked very medieval. I decided to make the whole area more Roman by making most structures either ramshackle wooden or Spanish tile like. 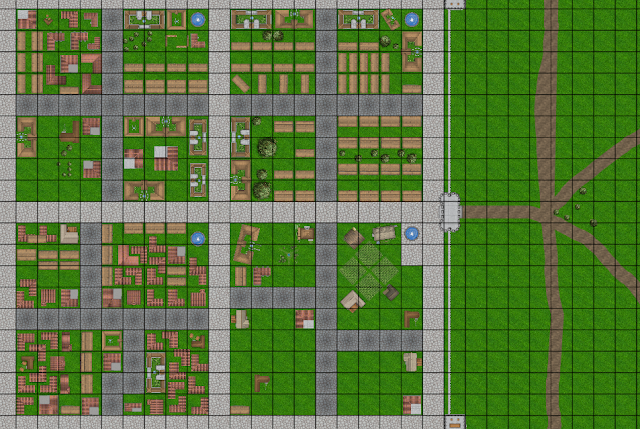 You can see those Spanish like rooves from 35,000 feet. Nice.

Then I wanted new villas. Just two choices didn't give a lot of variety. 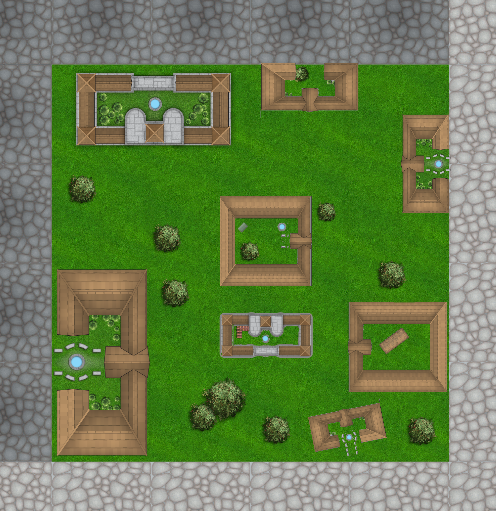 I now have 4 or five variations. Square or rectangular and so on. One thing I discovered while working is, if you leave the courtyard area transparent, you can trees and other structures to the yard. Nice touch. The other thing is you can use the software to flip, rotate and scale the same building so even a copy doesn't look exactly like the one next to it.

For my last trick, and this is completely outside of the scope of Worldographer, I decided to add my party. 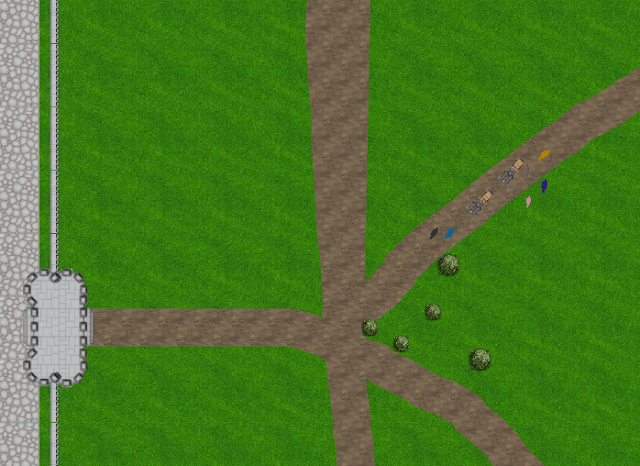 It is completely useless for game play, but I thought it was a nice trick. I have two wagons and 5 horses, to match my party. If you zoom in too much, there is zero detail, so the trick loses it's charm. But I enjoyed giving it a shot.
Posted by Phil Viverito at 12/07/2019 09:23:00 PM 2 comments: