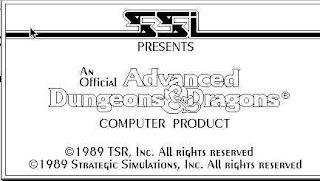 Pool of Radiance by SSI was the first AD&D released on computer. SSI brought to Macintoshh in 1989. It was a great and faithful rendition of AD&D as it was at the time and used the Forgotten Realms setting. 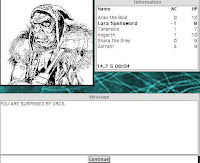 Game play involves running a custom built party of 6 PCs. Your goal is to drive off the monsters inhabiting the ruins around the city of Phlan. It will take some hacking, slashing and puzzle solving to complete. One of the features of the overworld is open game play, meaning you aren't on the clock and can goof around for a good long time before actually tackling the problems at hand.

To complete the game, you need to complete a couple of quests. On the way you'll knock out a few (ok, a lot) of creatures in combat. 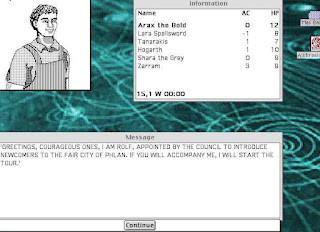 Clicking a character pulls up their character sheet. Characters are created on the fly as the user selects options. One word of caution, the rules are exactly as they are in AD&D with level limits for demi-humans in full effect. Having said that, this software is a great way to quickly create characters for AD&D. 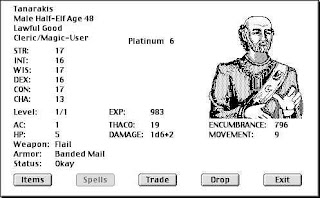 The combat window, a place you will be a lot is pushed perspective. Your party is arrayed in the order you selected previously.
What order? You didn't pick an order? Me, too. You can have multiple saves, so you can go back and fix this if you saved. 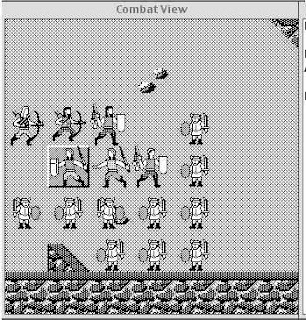 Melee attacks are initiated by selecting MOVE and moving into an enemy. Missile attacks have their own AIM button. One important thing to never... NEVER! do is allow the computer to automatically control your characters. The AI is not bright. And the screaming 25 mHz processor is about 9 million times faster than you can hit "stop" with the mouse. It's not fun.
The other thing that should be avoided is moving away from melee. Every creature in contact with you gets a free attack. It is an efficient way to die.
The system is so faithful to AD&D, there should be some sort of warning on things that can happen. AD&D doesn't have clear healing rules, so in Pools, the only way to heal is camp and burn healing spells. If you want more spells, you have to spend hours studying. Characters are generated by the computer but actually use the ruleset for allowable scores.
One thing to keep in mind is encumbrance. It controls how many moves you get in combat. If you are loaded with coins, you will have problems.
Another thing to keep in mind is death can be permanent. Once a character goes down, you can bandage them before they reach -10 HP. This allows you to get them back with only healing spells.
The instruction manual is in three ingenious documents, a manual which explains the rules of AD&D, a journal to be read and a translation wheel which is the copy protection. The wheel is used to start the game, you compare two symbols to translate them to English. This "code" is entered to activate the game at every start up. As annoying as this is, I've brought the wheel to my game table to create puzzles for the players to solve.
After 33 years, the game shows it age but is an excellent reminder for what AD&D and Forgotten Realms is like. I give it 4 of 5 stars.
Postscipt: The game does have a couple of cheats. Why else would you read a review of a 33 year old game?
First, you can mug players for cash and prizes. The most basic iteration of this is to create 7 characters, one you keep and 6 you delete. Load the party and transfer off everything you want from the sacrificial characters, save then delete them. This covers money and items, so it is two cheats in one.
The second cheat is a classic duplication of items, say a +5 vorpal sword. This one takes a little effort. Once you have a desirable item, save and quit the game. Duplucate the entire party folder. Twice! Name one folder "Delete" the second "Back Up". Move them elsewhere on your hard drive. DO NOT LEAVE THEM IN THE PARTY FOLDER!
You will be working with the Delete folder and the regular party folder. Launch the game and move the desired item from one player to another. Save and quit. Now move that player from the "Delete" folder and overwrite the character file in the party folder. Relauch the game and two characters will have that item. You can repeat this over and over again.
A third cheat is a variation on the first two. You actually have slots for up to 8 characters, the two extra are for NPCs. It's pretty rare to have one NPC and extremely rare to have two. You cannot simply move an item from an NPC to a PC. But if the NPC dies, you can take their stuff. In order to do this cheat, you have to ensure the NPC dies but also ensure that you have a save where they are still alive.
Once you have the NPC in the party, save the game twice under two different slots, A and B. Quit and reload slot B. Get the NPC killed in combat. You can attack them yourself in case you are having trouble killing them. They can run off, so make sure you attack with everything you have at the start of the round. Take their stuff at the end of combat and save as B. Now go back to the duplication trick and copy the item a couple of times. Reload the game under save A. The NPC will be back in your party alive while a PC has the duplicated item.
The next cheat is the J training cheat. When you are in the training hall, if you press J, the selected character gains a level. And ages. You can serious destroy your fun with this cheat. This cheat is always active in the Mac version of the game. To use it under DOS, you need to launch the game as "start STING" or "st STING"
One final cheat monkeys around with the death mechanics. If you have a character die in combat, meaning they dropped to -10 HP or below, you normally need a resurection or raise dead spell after combat. This can permanently kill your character. In the case of Elves, neither spell works.
To get around this, let the character die in combat, but don't leave the combat window. Target the dead character with a spell that does less than 10 points of damage and hit them. A dead character is treated by the system to have 0 HP and the damage you do restarts the death process so you can bandage them before quitting combat. This only works with spells like cause light wounds or burning hands, and never works with swords or arrows.
I hope you enjoyed this review.
Posted by Phil Viverito at 12/06/2021 10:50:00 PM No comments: