These Old Games, powered by Macintosh 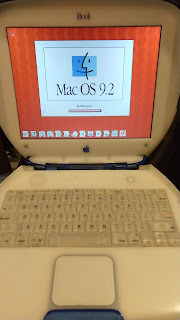 Well, let me introduce you to the little machine that sparked the idea for These Old Games. I always meant to review old video games, but that never came to pass. Too many people do it better.

Anyway, I have this little odd machine from 1999 that just keeps ticking. It began it's life as a Scandinavian Mac from lord knows where. The prior owner tried to throw 10.4 on it via an external DVD drive and apparently got hosed by the language or the chipset. It ended up as eBay fodder. I picked it up for 20 bucks.

I feel bad about that because they went through all 52 steps to upgrade the hard drive from 6 GB to  16 GB.

I was able to "fix it" by wiping the whole thing down to 9.0 then disc danced my way back to up to 9.2.2 using discs I had lying around. Theoretically, the whole thing shouldn't have worked, but somehow it did. It also required me to install 10.0.3 Kodiak. As beta-ware it's ok. 0.3 is nothing like OSX in use.

Looking at the machine, I can't tell if the prior owner replaced the Apple logo with a newer one or perhaps that logo is made of plastic which is not as susceptible to sun bleaching. I've had to glue the little leaf back into place twice in the past decade or so. 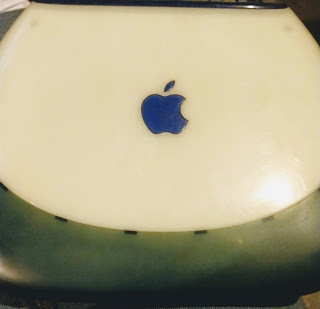 The little beast has an upgraded battery and RAM. I believe it has a 512 mb RAM chip inside, but it can't read it to the full potential. The modern battery gives it a life of an 8 solid hours, or days if I run a RAM disk.

The Airport card works, but doesn't connect to any wifi router with modern security. I can plug into a cable, so theoretically, I can connect to the internet. I'm running Classilla but that is super wonky with modern websites. It's far better not to try.

To supplement the 16 GB hard drive, I have a 32 GB thumb drive which occupies the single usb port. It's a pain because this machine works nicely with my Bamboo tablet.

Over the years, I have been able to pick up editions of Mac Addict at my local thirty store, so I basically have every insane bit of software "1999 Me" would have wished for, two decades late.

This machine is ridiculously overpowered for what it was meant to be, but I can't tell you great it is to open up Hitchhiker's Guide to the Galaxy or Zork.
Posted by Phil Viverito at 4/16/2020 01:28:00 AM 4 comments: