They came on Friday! 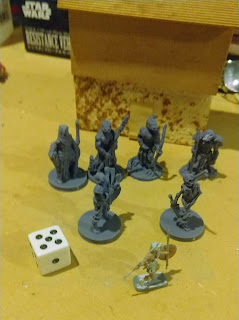 The amount of detail on these figures is incredible and because they are 3d printed, they don't have a bit of flash like metal figures. I swore one of the skeletons had a bit of something sticking off his neck at an odd angle, but when I looked closer, it was an axe lodged in his armor. That's cool!
I was expecting some sort of lines as an artifact of printing, and it is there, but it's super fine. It looks like a pattern on the figures. It looks like a pattern on the figures. I don't see any point in trying to remove it. A bit of paint will probably completely cover it. I suspect that a simple wash would make it more evident, but we will see. 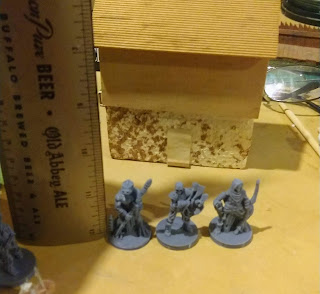 As you can see from the photos, these figures are large. Way bigger than 28 mm. They border on being "model sized". If I was trying to make a 28 mm army, I'd object. But these are for D&D, and monsters are notoriously "not to scale". The bases are almost exactly 1", so for 1"=5 feet on a game surface, these are perfect. In the picture above, the building in the background is an in-between scale, good for 25 mm or 15 mm so I am not exacting in my scale anyway. "Looks good" is better than "in scale".
I wouldn't call these minis "unbreakable", but they feel tough. The material does feel like you could break it with a tool, so modification would be difficult. However, a random drop off the table probably wouldn't hurt them. Each package of figures came with multiple poses.
Speaking of "modification", there probably isn't any point. The 6 Archer Skeletons came in 3 poses, while the 7 Melee Skeletons have 7 different poses as did the Lizardmen. And these poses are not your typical mini "poses" with a leg or an arm moved. Each is a different sculpt, but share common details so obviously they are from the same theme or group.
All and all, I'd give these 5 of 5 stars. I can't wait to start painting.
Posted by Phil Viverito at 7/05/2020 01:44:00 PM No comments:

I have managed to capture the error from Cubify's Invent software. 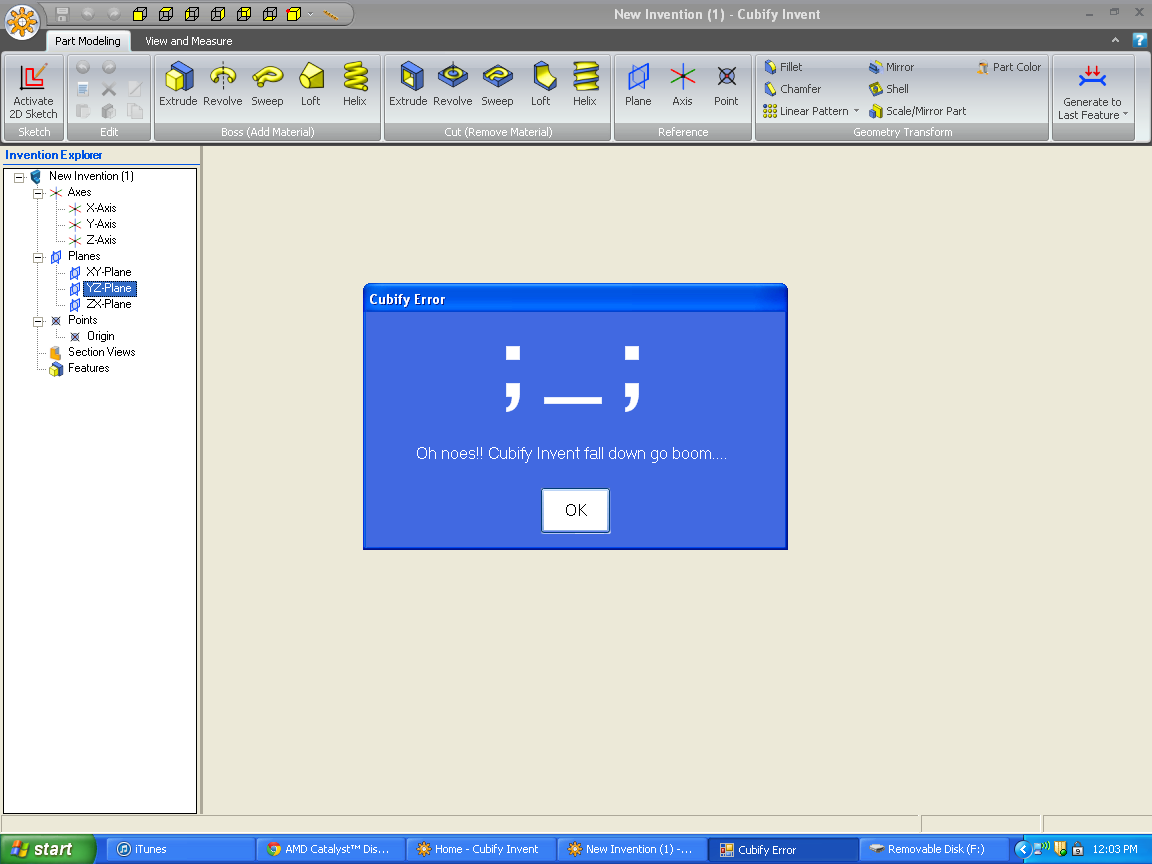 This error indicates that the video drivers are not up to date. I am really stuck with this, the computer I am working on was downgraded from Windows 7 to XP and there is no going back for a variety of issues. XP is really at the end of its life and I shouldn't be using it.
To get around this issue, I have been creating files with TinkerCad then importing them into the Cubify pre-flight software. (UPDATE - TInkerCAD has disappeared.) Both TinkerCad and the Cubify software work great together.
Posted by Phil Viverito at 12/10/2013 10:31:00 PM No comments:

Cubify is a simple 3D printer with software called Invent.
I will review the software and printer shortly, but first I want to share some troubleshooting tips.
If you stumble across this error message:
"Oh noes!! Cubify Invent fall down go boom"
It is time to update your video drivers. This error is remarkably un-descriptive so you will have to take my word for it.
This error bit me on a computer that was downgraded from Windows 7 to XP. (Who the heck does that?)
Posted by Phil Viverito at 6/20/2013 10:30:00 PM No comments: