Pitching Ideas - Return to the Inside Out

I just got a call from my friend Doug. He wanted some help with a project for his classroom and I did what I could do help. Then went for the important business, getting players for a new campaign. 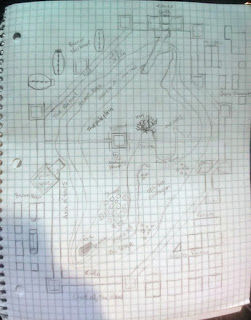 I did my elevator pitch, "A Druid, a Unicorn, and a Space Marine are going to save the world from technology so high, it's indistinguishable from magic, Rule set, AD&D."

If that sounds a bit familiar, it was a one shot I did last year for the wife and kids. It went over like a lead fart because the setting was post-apocalyptic in the middle of a pandemic. Yeah, yeah, yeah. At least I didn't pour tons of money in the TV show based on The Stand by Stephen King.

Every DM has ideas kicking around their brains to build a world. Most DM's I've played with will tinker with a variety of setting. I am not built like that. Every D&D campaign I run is in a post-apocalyptic. The one thing I am good at is dropping in anachronistic ideas in ways that don't disturb the players.

My campaign settings diverge from reality in the mid-eighties with the development of fusion power. There was the Outreach, where every country in the world dumped resources into a multi-nation space program. This idea was based on "The Great Awakening(s)" that happened between the 18th and 20th centuries. Except instead of being based on spiritualism, it was based on exploration.

There was a period of upheavals as fusion tech was deployed. This was followed by the Outreach, a world wide space program using Space Fountains to deploy probes, then ships and colonists around the solar system. This went on for a couple hundred years. It pretty much distorted all nations so they no longer existed as we know them. The goal as DM in this step was to completely divorce the setting reality by making the question "What happened in/to country x" invalid or at least unimportant.

The next goal in the Outreach was to get to other stars. Back in the 80's, we didn't know and didn't assume most stars would have planets, so the effort to find them in this setting to centuries by sending out probes. This created a situation where the Space Fountains used to reach the solar system needed a massive upgrade. And this is where everything went wrong.

Obviously, such a system needed to massive infrastructure built. And this was done. However, the second step was a computer based solution. They wrote a massively complex program to handle the upgrade from the first generation of Space Fountains to the truly titanic interstellar Space Fountains. It was a very rough AI.

That AI had a glitch. It did things too efficiently. It reprogramed the Space Fountains to launch a few tentative research ships. Then instead of creating many, many waves of ships to the stars, it sacrificed everything for just one giant wave. The effort destroyed or impacted every high tech item on Earth, leaving the planet's technological systems to collapse. 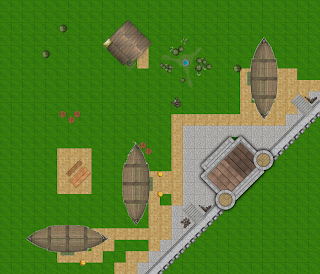 Centuries of high technological items didn't disappear in an instant, they slowly brokedown. As people tried to hold on, they used the technology to change themselves and the world around them. They were morphed into different species, elves, dwarves, goblins and so on. Some people unlocked technology so high it replicated magic. Others messed with probabilities, opening up gates to different universes where our rules didn't apply.

The Inside Out is a defense against the AI which has collapsed to a single underground location. The locals have banded together to construct a veritable castle around the entrance.

The creatures coming out of the facility are interpreted as undead, demons and devils who's vast technology appears as magic.