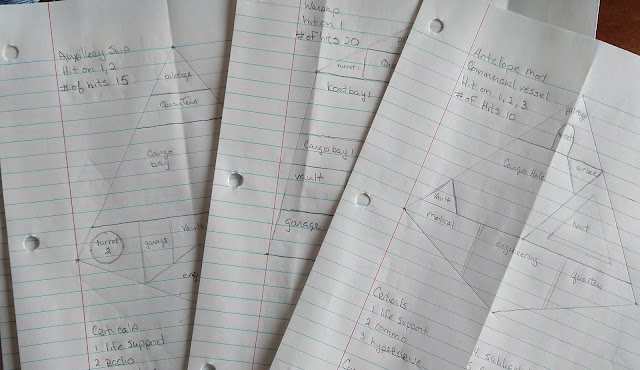 There is something liberating about a blank piece of paper. I have better tools, but paper and pencil is the best for ideation. After looking long and hard at Star Smuggler, I decided to create a mini-game based off of it. This is probably very derivative of many sci-fi games.

An Auxillary is a commercial ship designed with military tech and refits in mind. It is not a war vessel, but has some defenses. It is hit on a score of 1 or 2. A critical will be scored on two 1's, sequentially. Two criticals will be score on sequential rolls 1 and a 2. For example a roll of 1, 1, 2, 3, is just one critical and three hits, while a roll of 1, 2, 1, 2 is four hits and four criticals.

Critical hits score a point of damage and damage a specific part of the ship. Critical hits are scored against certain parts of the ship: Life Support, Communications, Engines, Warp Drives, Shields and specific compartments. While each of the first 5 can be damaged only once, specific compartments can be hit multiple times. Think of it as trying to destroy a garbage can with a sledgehammer. It just keeps taking ugly hit after hit. Enough hits and it stops being a garbage can or in this case, a ship.

Next post, compartments, shuttles and fighters plus roll modifiers.