I cross a threshold, 32 downloads for a 32 year old character sheet for Unearthed Arcana.

One of the things I liked about UA was the addition of the comeliness stat as a distinct item apart from charisma. The ability to revolt or to fascinate based on appearance, modified by charisma. I liked the interplay of stats.

In my campaign, we did alter the rule a bit. First, you recorded your raw comeliness and as a DM I removed points for racial modifiers based on the race they were dealing with. I recall building a table off of the racial preferences table. Let's face it, to a half-orc, half-orcs are hot and humans not.

Having put all of that effort in, the house rule only came into play a couple of times. The problem with comeliness is that we are trying to insert a visual dimension into a format that is nearly only audio.

Every wonder what "Kennedy the DJ looks like?" No idea.

Amusingly,  a local radio station has a slot for their "Kennedy" and over the years "Kennedy" has morphed from man to woman to man again, with zero comment. Strange and slightly funny if you think about "Kennedy, the brand" not "Kennedy the DJ".

However, this is kind of what the rules imply, that your character has or has not Style and Poise, Charm and Looks. Its a great stat for Bards, but its a shame what Bards were back then.

Please let me know what you think in the comments. 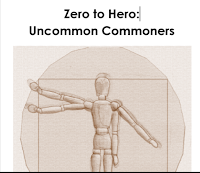 Commercial product placement:
I also have a little book called Zero to Hero: Uncommon Commoners, over at DrivethruRPG. I am obviously thinking of writing another and Gnolls might be the subject.
Posted by Phil Viverito at 6/21/2019 08:51:00 AM