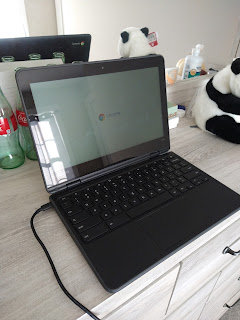 We've got a lot of Chromebooks going on here. This one is my daughter's Lenovo 300e which is ostensibly to be used for school work aSometimes, anyway. Notice the power cord. It typically isn't charged when it needs to be.

Here are the stats:

This Chromebooks greatest weakness is its strongest feature: the storage space. Being designed for Education, children should not be saving stuff to the hard drive. The machine is meant for the cloud. And as a cloud-based machine, it does very well. The wi-fi is solid, as is the Bluetooth.
As a sub $300, sometimes sub $200 machine, it has some lacks which make it a true cloud machine. There is no HDMI or Ethernet port.
The speakers are mildly ok, which is actually desirable in the classroom. It does have a headphone jack which is the preferred method of listening for students. The stereo headphone jack also has microphone capabilities. The screen has the same performance factors as my HP-14dk1000 laptop in a smaller format, locked in at 1366x768. For schoolwork, this is just fine due to the assumed connectivity issue. Students won't plug into their phones and such for images of high enough resolution to make a difference.
It has 2 USB A and 2 USB C ports, where one of the USB C ports is used for charging. Battery life is great if your child charges it. It also includes a standard camera and microphone, built-in. They are fine for Zoom or Google Classrooms. The lappy is rounded out with a micro-SD card slot.
Normally I don't mention the frame or case, but the frame is solid with no flex and the case has a variety of textures for easy gripping.
Performance is nice for basic Google Drive Work. It will run good-sized videos at a decent rate. At least for 1366x786 resolution.
As an educational laptop, it doesn't have guest mode or other features. It is a managed device. If you purchase one of these "refreshed" or used, it should be unassociated with the school district. If it isn't, I would suggest returning it. School districts have a protocol in place to release products for "refreshed" or "renewed" sales, it's worth money to them. If you find your "renewed" Chromebook has an administrator account, it is probably one of the zillion computers lost or misplaced by a child. It probably won't be worth the effort of "fixing" it even if you find such things to be trivial.
Try a reputable reseller if at all possible.
Posted by Phil Viverito at 11/10/2021 11:29:00 AM No comments:

I have several Chromebooks to support my websites and my kid's educational needs. I will be looking at the Acer CB311 series of machines, but today I am reviewing the Acer CB311-10H.

This is a sub-$300 machine, very often coming in at a little over $225 on sale. It's a lightweight machine for basic computing. At 2.42 lbs (1.79 Roman Catholic) the 7.83 x 11.65 x 0.71 inch machine feels solid. It even passes my one-hand carry test, where the machine still responds to the keyboard and trackpad while walking around. It doesn't flex at all. It's a rubberized, bombproof basic.

The wi-fi is good and it has built-in Bluetooth capabilities. It features two USB ports, a pair of USB C ports, one of which is for charging, a micro-sd card reader, and a headphone jack. There is no large card reader or Ethernet port, which really shouldn't surprise you at this price point.

The 11.6-inch diagonal screen feels well proportioned to this laptop but is on the small side. The resolution is capped at 1366x786 which isn't horrible on 11.6 inches. It plays video well enough but you can forget about 4k even though the dual processors and graphics card could maybe do it. It is also not a touchscreen, so there is that.

The standard laptop camera and mic pair are fully functional and work rather well. However, you won't be mixing A/V on this machine without Linux.

The one kick in the pants right out of the box is the speakers. It has two but they seem very poor on the first boot. Oddly, if you run the update they actually improve. I am not sure why this is, but it was a nice save by Acer. Granted, these are laptop speakers. Don't expect too much. Running Youtube or YouTube Music natively is nice and the machine does an adequate job of audio rendition. It's not like you work in a dance club.

The other downsides are the lack of a mic jack, HDMI, and the previously mentioned Ethernet port. Well, it was cheap. USB do-dads are an option but I only use an external mic even though the internal mic and camera are nice.

Additionally, the lappy runs Android Apps and of course has all of the Google Drive features that are standard on modern Chromebooks. I also have Ubuntu 16.04 running in Crouton, so while the 4 GB of memory seems light, it is functional for basic work.