I don't do unboxing videos because I am super impatient. Let's just hop to the first box of prizes. 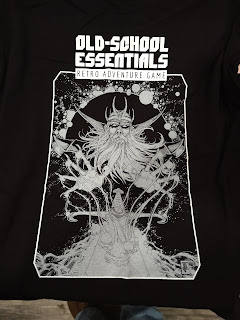 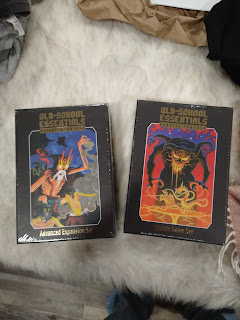 They're a pair of boxed Old School Essentials sets! They were due to be delivered last Friday, but Buffalo got nailed with a couple of feet of snow. I am actually glad they were delayed because I wouldn't have shoveled at all. I would have been rolling characters and planning my next campaign.
When you have 1 1/2 dogs worth of snow, starting sooner is better than waiting for later. This is what is called Heart Attack Snow. One shovel load has the heft of several thousand unpainted figures. Not those modern 3d printed figures, but the classic 1970s lead figures.
Which leads to the next unboxing... 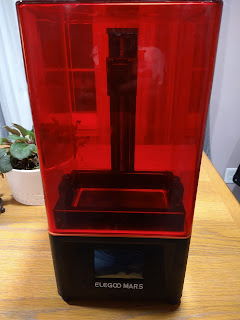 I picked up a used Elegoo Mars 3d printer. I had it in my hands last week, but knowing that a snow staorm was coming, I wisely left it in the basement until I could get things cleaned up. There are several other pieces to this setup, which I didn't pull out of the box. It also came with a DIY curing tank.
It's a good thing that it's a three-day week because I will be very, very busy this weekend.
Posted by Phil Viverito at 11/21/2022 06:40:00 PM No comments: