I love amusement parks. My sense of wonder and adventure is fueled by the novelty of pure fantasy made real. I don't have a great camera, only my Moto x4 phone. When combined with Google Photos, sometimes a phone can create some wonderful images.

Today, I would like to share all of the panorama images I captured at Disney this Christmas time. It was a wonderful trip and these images really captured the magic.

Ah, the things you notice when you aren't looking. 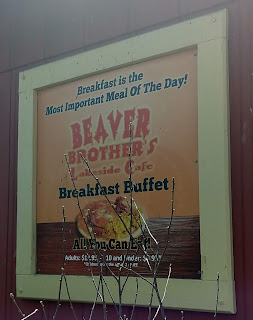 I could totally picture myself running here while camping. It is so close to the cabins and so much easier than cooking yourself.
Posted by Phil Viverito at 6/18/2018 09:56:00 AM No comments: 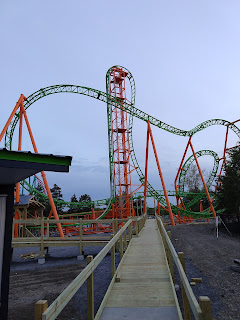 This evening, I saw them testing the Tantrum at Darien Lake. When the action stopped, I remember to take out my phone and snap some pictures. Oops.

This coaster holds 8 riders in two row of four, is about 100 feet tall and features 90 degree climb to a more than 90 degree drop. It looks amazing.

A little research on this model revealed that it was made by Gerstlauer and has the moniker "Euro-Fighter". It reminds me of the Motocoaster because the small footprint. This one seems more solid as it has it's own foundation rather than a frame base. 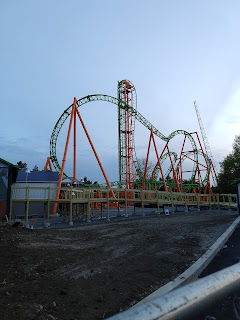 I like these small footprint coasters, as the gee forces and excitement are crammed in a small space. They are a blast from end to end. The downside of such a system is the powerful mag brakes at the end to bring the cars in safely. As quick as they are, the ending is always rough. Don't get me wrong, I've ridden the Motocoaster at least six times this year because I love it. I can't wait to ride this one.

It is opening Memorial Day Weekend but I not exactly sure on which day.  As you can see from the images, they have tripods and such around for construction and will likely add some nice landscaping as the season goes on. 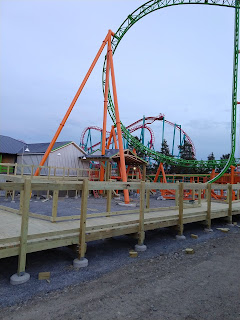 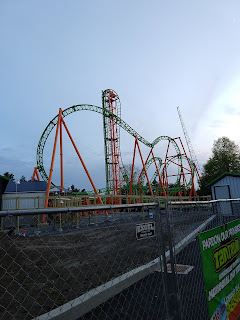 May will be cold and rainy, but that has never stopped us from going to the park opening day. May 5th, 10:30-8 will be the hours. 69 days from today.

The water park opens a few weeks later. We have our season passes and this year we picked the food option. Last year, we spent over 22 days in the park and it seemed to make sense to add in a meal plan. I figured five people dining 22 times a year vs. the $69.99 price tag, that works out be less than 20 bucks a visit. I can't feed a family of five for $20 at McDonalds. We'll see how it goes.

Today, I am posting some of the nicer images I took over the years. I should create an album for this sort of thing.