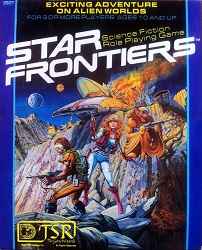 The main problem with Star Frontiers is, it isn't D&D or Traveller. The secondary problem is, it isn't a tactical game or a board game either. Shockingly, it has elements of all 4 genres.

This tiny box packs in all of the complexity of a multi-book game engine like Traveller or any edition of D&D squished into 116 pages. However, it isn't like either of those. Its system is 1d100 based. It has levels but only 1-6 and no classes. Plus aliens. Real aliens.

Where Star Frontiers deviates from D&D the most and hugs Traveller the most is your characters are complex and fully formed from the get-go. You are never a knock-kneed dude in robes hoping someone won't blast you into next year because you don't know anything. Like Traveller, you're marketable from day one. That's important later.

With this first set, you have 4 playable races, Dralasites, Humans, Vrusk, and Yazirians, and one NPC race called the Sathar. Each character has pairs of attributes: Strength and Stamina, Dexterity and Reaction Speed, Intuition and Logic, Personality, and Leadership. These skills are "rockable" meaning you can steal a bit of Strength for Stamina, Dexterity for Reaction Speed and so on. You cannot swap Leadership for Strength.

This game has no classes per se, it has 3 PSA skill groups named Military, Biosocial and Technological. Each character selects one skill from one group and a secondary skill from a second group. Due to this combining of two wildly different skill sets, no two characters are really the same. Another twist on the rules is they assume every character will use a weapon, even if unskilled in weapon use. Fire power is a great equalizer.

"Level" is equally odd, there are 6 levels of skill for every skill and your character doesn't really have a level at all. "Level" is answering "What is the highest level skill you have?" A new character and an old one can basically stand shoulder to shoulder.

This game game in a boxed set with 3 booklets, a two-part map, counters and a cover/map for the module SF0.

The first booklet is the 20-page basic game. It's a module in its own right and teaches players how to play on the map with the counters. While it may seem like an underwhelming first game session, it is specifically designed to march the players through every rule in the Expanded book. At least in short form. You can expect at least one person from the party to be able to shoot, throw a grenade, hack devices, drive an array of vehicles, do medicine, heal, etc.

The expanded book does just that, expands on game play. The rules #1 oddity is the game is meant to be theater of the mind, which makes the map and counters rather secondary unless you want to make your own maps. Within the expanded rules is a monsters section, where a couple of typical alien creatures are given and rules to modify or create whole new monsters/aliens are nicely integrated with the character skills. This system is very cool and powerful.

Rules for vehicles and robots are equally nicely spelled out and are designed to go hand and hand with your character's abilities as are tactics and movement. Even though you are limited to handful of skills, the system is really robust because there is usually more than one way to progress.

For completeness, the module SF0 Crash on Volturnus continues the complexity and expands (then contracts) the world around the players. Once your players have gone through this module, they will clearly understand the concept of "Talk First/Shoot Second", a detail only hinted at in the Basic and Expanded rules.

For 116 pages, the rules are tight and feel well planned. The presentation is wonderful, on par with anything at the time, and perhaps taking a jump forward with the nice maps and counters. Oddly, space combat and ship construction were left out, probably due to space constraints.

The game system is very inventive, but without continuing support from TSR there the game feels lacking in many regards. The specialty of this set of rules is the home brew campaign which is very doable, which is a good thing because that's all we got after the second boxed set. Back in the day, the two modules based on the films 2001 and 2010 felt odd and out of place in a space opera setting, but that should have been a clue as to how robust the system was when playing out home brew stuff.

Many systems when view in hindsight have a dated feel where it is a product of it's own age. This set suffers this in spades. It's not like D&D or Traveller, where it was reimagined over and over again to keep up with the times. We are forever holding out for Han, Duke, and 3rd Imperium that never came. There are no psionics, no Force, no magic, no sentient killer robots, no cybernetics or internet. Computers tend zig-zag from the mighty talking machines capable of full thought, but can't be removed from the 15 rooms they reside in which makes them ignore-able.

Many times, I have totally ditched the background and acted out scenarios from the Stainless Steel Rat series, Star Wars, and Aliens in this system. It actually gives a good accounting of itself. While I rated it three stars, remember this is three modern stars. As flawed as the support was, the rule still shines.

I recently picked up the print copy from DriveThruRPG. The printing is excellent and the binding looks sharp and clean. 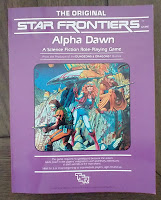 The Basic Rules, Expanded Rules, SF-0, plus the maps and counters are all printed within the same book. These are unmodified copies of the originals. The whole thing runs about 200 pages. 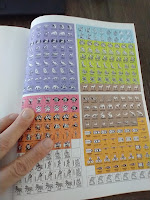 The contents/index is in that classic OSR blue while the maps nicely have a border that can allow you to scan. Theoretically, you could cut them out, but I wouldn't want to damage the book like that. Of course, DriveThruRPG saves you the trouble by offering a PDF/Print combo.
I'm working on a review of the Knight Hawks set from DriveThruRPG and then hope to return to classic ORS D&D themed posts for a while. Sometimes, I get stuck in a rut with Sci-Fi and can't stop myself.
I can't believe that 2022 marks 40 years of Star Frontiers. 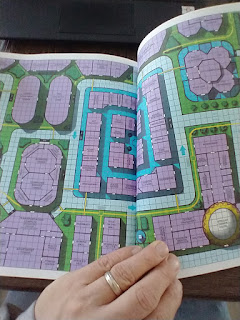